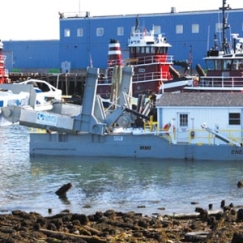 Congresswoman Chellie Pingree announced that Maine’s tidal power company, ORPC, is will get $5 million in federal grants to help improve its technology.

The Ocean Renewable Power Company (ORPC) in Portland has won two Department of Energy (DOE) grants for a total of nearly $5 million to help them further develop their tidal power technology.

“This was a highly competitive grant program. The fact that ORPC won 2 of the 17 awards is an indication of how successful their technology is. This funding will help Maine continue to be a leader in developing new sources of clean energy that create good paying jobs right here at home,” said Congresswoman Chellie Pingree.

“We’ve proven the technology but this federal investment will give us the boost we need to take it to the next level. And it’s going to mean more jobs and investment in Maine,” said Chris Sauer, President of ORPC.

ORPC became the first company to connect tidal power generators to the electric grid with a project currently underway near Eastport.