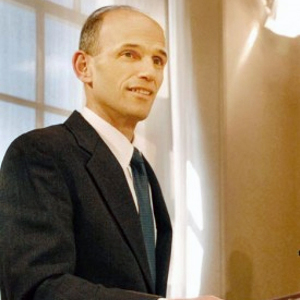 Gov. John E. Baldacci. photo Ramona du Houx
“It’s great to be in Maine more and I am looking to do what ever I can do to be helpful to this state and her citizens,” said former Maine Governor John E. Baldacci when Pierce Atwood’s Managing Partner, Gloria Pinza announced that Gov. Baldacci has joined the firm as Senior Advisor, Economic Development & Government Relations.

Gov. Baldacci will reside primarily in the Portland office, but will work in the firm’s other New England offices and its Washington, DC office.

He comes to Pierce Atwood following an appointment as the director of the Department of Defense’s Military Health Care Reform Initiative where he worked for the former Under Secretary of Defense for Personnel and Readiness, Clifford L. Stanley, to conduct a full-scale review and evaluation of military health care and wellness. “I worked for the best people with the best people, and I really enjoyed that,” said Gov. Baldacci.

Gov. Baldacci served two-terms as the Governor of the State of Maine from 2003-2011.

“We are delighted to have Governor Baldacci join us at Pierce Atwood,” said Pinza. “The Governor’s many years of state and national public service as a Governor and Congressman and his expertise in the energy, healthcare and economic development sectors provide a perspective that will serve our clients well and enhance our regional and national growth.”

Prior to becoming Governor, Baldacci represented Maine’s 2nd Congressional District in the U.S. House of Representatives from 1995-2003 following 12 years in the Maine State Senate from 1982-1994. He began his political career at the age of 23 when he was elected in 1978 as a member of the Bangor City Council. He holds a Bachelor of Arts degree in History from the University of Maine, Orono and an honorary degree from Bowdoin College, Brunswick.

Pierce Atwood’s website stated, “As a former Governor and Congressman, Governor Baldacci brings a unique perspective to his work and provides firm clients with valuable insight into the relationships between business strategy, economic development and state and federal policy making.

“Working closely with each of our Practice Groups, he is able to counsel clients on local, state and federal initiatives, government procurement, economic development projects, and various policy issues, especially in the areas of energy and health.”

During his tenure as Governor, he initiated reforms in the areas of health care, energy development, administrative reform and efficiency, and public education.

• He led significant efforts to expand investment in workforce training and development. One of his primary contributions in this area was the creation of Maine’s community college system, which provides exceptional opportunities to Maine students while supporting economic development in the state.

• He served as the co-chairman of the Northern New England-Eastern Canadian Premiers Conference, where governmental leaders worked to advance regional initiatives in areas such as energy, environmental stewardship and conservation, workforce development and economic development.

• During four terms in the U.S. Congress, he served on the Agriculture Committee and the Committee on Transportation and Infrastructure.

• Former Chairman of the Board of Directors and current Board member for Jobs for America’s Graduates, a national nonprofit organization that works to reduce barriers to high school graduation and help students to transition to college.

• Campaign co-chairman for the Foundation for Maine’s Community Colleges.