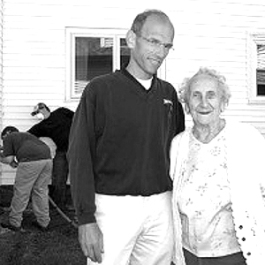 Officials from the U.S. Department of Energy (DOE) joined Governor John E. Baldacci on December 14th to recognize Maine for running one of the strongest weatherization programs in the country. At a Portland home where weatherization improvements have been made, the federal representatives said that Maine has a model program.

“We think state policies will determine a lot of the success of our nation’s energy conservation efforts, and Maine’s weatherization program and energy policies are among the most ambitious and strongest in the country,” said Gil Sperling, a senior policy advisor for DOE.

Governor Baldacci said DOE funding, including $42 million that MaineHousing is receiving under the American Recovery and Reinvestment Act (Recovery Act), are helping the State achieve its energy goals.

“We know that to be successful in reducing the cost of energy, reducing carbon emissions and growing jobs, we need to both expand weatherization and encourage renewable energy development,” said the Governor. “Weatherization efforts have enabled us to create jobs while saving residents and businesses money. Through the Recovery Act our ongoing efforts are receiving an important and timely boost.”

This year the Legislature passed the Governor’s comprehensive energy package, An Act Regarding Maine’s Energy Future, which established the goal to weatherize all residences and 50 percent of businesses by 2030 and reduce the State’s consumption of liquid fossil fuels by at least 30 percent by 2030.

DOE officials said Maine excels in home weatherization because of its commitment to weatherize all homes, strong support from policy leaders and community action agencies, a capable infrastructure of industry partners and its historically strong weatherization program.

Monday’s event took place at a Portland home that was weatherized by Biosafe Environmental Services Inc. Biosafe is a private contractor that the People’s Regional Opportunity Program (PROP) and the York County Community Action Corporation (YCCAC) have hired to perform weatherization work in the Cumberland and York county regions. PROP, YCCAC, and the other state Community Action Program (CAP) agencies are important partners in delivering weatherization services to Maine people.

“The proven track record of successful weatherization projects by Maine’s Community Action Agencies enabled us to act quickly in response to the Recovery Act,” said Suzanne McCormick, President and CEO of PROP. “Because of our long weatherization history, we were able to ramp up quickly and hit the ground running. That means more Maine families will benefit before the worst of the winter weather arrives.”

MaineHousing allocated the Recovery Act funding among Maine’s CAPs. MaineHousing officials said that the agencies have hired 55 additional staff and more than 30 private contractors for weatherization work, helping achieve one of the Recovery Act’s goals of creating more employment.

“Maine, which has among the highest energy burdens in the country, has strong leadership and infrastructure for getting the weatherization job done, including having an exemplary working relationship with federal, state, regional and local agencies,” said DOE’s Peter Roehrig, Special Assistant in the Office of Energy efficiency and Renewable Energy.

For more information on weatherization and Maine’s other energy efficiency efforts, visit http://www.mainehousing.org and http://www.efficiencymaine.com