Andrew Bossie spoke at the Statehouse, promoting Opportunity ME last winter; six months later the petition turned into a statewide law helping college students. Photo by Ramona du Houx August/September 2007 By Ramona du Houx It’s rare that a citizen’s initiative becomes law. In fact, in Maine’s history it has happened only six times. The most recent was on July […] 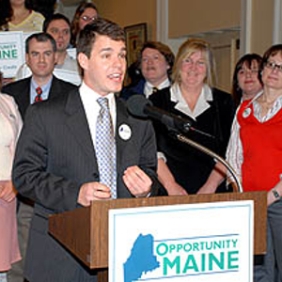 It’s rare that a citizen’s initiative becomes law. In fact, in Maine’s history it has happened only six times.

The most recent was on July 2nd, 2007, when Governor John Baldacci signed the Opportunity Maine legislation.

“For months I stared at the quote on the office door that read: ‘Never doubt that a small group of thoughtful committed citizens can change the world. Indeed it’s the only thing that ever has’,” said Andy Bossie. “Now I believe it. This is an exciting day for all of us who have worked for over a year to make college more affordable, to create job opportunities throughout the state, and to grow the economy.”

Bossie graduated from the University of Southern Maine with $27,000 in debt last May. He and others involved in Opportunity Maine didn’t allow their student debt burdens get in the way of celebrating their historic achievement on the day the legislation was signed. The new law will not affect Bossie and the majority of other students that helped with Opportunity Maine. These bright leaders of tomorrow did the right thing for all the right reasons, without personal gain.

Bossie can now look at students entering colleges in the state with satisfaction, knowing that he started a movement that will enable them to obtain tax credits for their student loans, if they work and live in Maine after graduation. The new law also gives businesses the option of paying the student loans of their eligible employees and taking the tax credit for themselves. This is an important provision for companies who need educated employees who are dedicated to living and working in Maine.

Currently, Maine has 30 percent fewer degree holders than the rest of New England, yet the burden of student debt has skyrocketed during the Bush administration years.

As a college student Bossie saw too many of his friends have to leave college because they couldn’t handle the debt they would have to incur if they continued. “And then there were those who never tried to get a higher education because of the prohibitive cost,” said Bossie. “I had to do something.”

At Opportunity Maine headquarters phones rang off the hook and e-mails from around the country piled up with congratulations and enquires. Organizers in other states were calling to find out how Opportunity Maine did it.

“Our volunteers had over 70,000 conversations,” said Bossie.

When Bossie approached the League of Young Voters looking for advice on how to start the referendum process they connected him with a network of allies that crossed party lines and demographic divides, provided expertise in fundraising and gave Opportunity Maine access to communications channels.

Initially last spring, after long hours of over 500 volunteers collecting 73,000 signatures statewide, Opportunity Maine organizers thought the initiative would simply go to the voters of Maine in a referendum. There was hope that lawmakers would help them pass it through the Maine House and Senate. That was just a hope.

Through Opportunity Maine’s effective lobbying efforts, Rep. Herb Adams and Sen. Phil Bartlett learned more about the initiative that would encourage Maine graduates to stay in the state; they took up the torch. The governor gave the initiative his full support.

“I believe in this legislation, and I know that it’s a key to opening up opportunity for Maine’s students,” said Governor Baldacci. “My parents raised eight of us, and they made it clear, the importance of education and higher education. Making sure that we had the chance for an education was one of the ways they took care of us. They instilled the idea of getting an education is one of the foundations where we could then put out our shingle, be able to determine our own prosperity, and realize our real opportunities here for ourselves and our families. This legislation gives us the tools to offer more to our young people — a fresh start right here at home.”

“It’s an incentive like no other state offers. Opportunity Maine is the GI Bill for Generation Next. When Maine men and women came home from WWII, they had the GI Bill waiting for them. It made new families, homes, carriers possible. For the first time in history, college was not just a place for rich men’s sons,” said Adams. “Students of this generation face the greatest debt of any generation in U.S. history. This new law gives our students a leg up, a helping hand. Businesses will see it as a job attraction and retention tool, enabling our most able and talented young people to stay and work in Maine.”

President Franklin D. Roosevelt’s GI Bill became law in the summer of 1944, and it provided veterans payments for higher education tuition, books, supplies, and subsistence allowances. The Opportunity Maine law tax credits would have a maximum of $2,100 per year and applies to an associate or bachelor degree.

For Maine, it’s estimated that $150,000 would sustain the program for two years.

“For four years, my administration has worked hard and maintained tight budget discipline,” said Governor Baldacci. “Now that’s paying off, and we can put more resources into tax relief and higher education. This is about our generation helping the next one. This legislation is a big deal. It’s going to require us to invest significant resources in the future, but we’ll be spending that money on the right thing. For this is a wise investment in our children’s future and our state’s economic future, and I believe it will pay huge dividends.”

The bill gained bipartisan, unanimous support in the House and was approved in the Senate by a 27-8 vote.

“I think what we have done shows the power of people,” said Rob Brown, executive director of Opportunity Maine.

“What we learned is that having conversations with 70,000 voters, developing a vast network of volunteers from every walk of life, and talking with our lawmakers about something that affects us all, really can make a difference,” said Tony Giampetruzzi, Opportunity Maine Steering Committee member. “We’re very pleased that the legislature heard us loud and clear, and took the right step toward an even better Maine.”

“The eyes of the nation are looking at Maine,” said Justin Alfond , the League of Young Voters Maine state director. “Young people, community leaders, and our elected officials have spoken decisively. Together we have put Maine on a long-term path toward economic and workforce development.”

The governor intended to start a program with the same objective as Opportunity Maine, and he is pleased that citizens showed the way. “It’s a model for the rest of the country. The petition volunteers did a tremendous job. Citizen participation in the state helps to lead our state. We are a state that’s open and accessible for all our citizens to bring their ideas and suggestions forward. This has only happened six times in the state’s history, which shows how important this issue is to all Mainers for their children and their grandchildren to have an opportunity to work and prosper in our state,” said the governor. “This is something I’ve wanted to do. It actually makes individuals a Pine Tree Zone. So rather than giving a business tax breaks, we’re giving those benefits directly to Maine’s future workforce to help pay for their education.”

The League and Opportunity Maine are moving forward with the Opportunity Maine by announcing plans to raise the awareness of the program to high school students, guidance counselors, current college students, workers’ centers and teachers’ associations statewide. “Seventy thousand signatures was just the beginning,” said Bossie.