“A lot of people here don’t understand what they have here, but I come from the outside and I’ve seen how it’s happening elsewhere,” said Dave Ellis owner of Wish, home and garden store in Skhowegan. Photo by Ramona du Houx   Winter 2006-2007 By Ramona du Houx Skowhegan has a rich past, named after a Native American chief; the […]

“A lot of people here don’t understand what they have here, but I come from the outside and I’ve seen how it’s happening elsewhere,” said Dave Ellis owner of Wish, home and garden store in Skhowegan. Photo by Ramona du Houx

Skowhegan has a rich past, named after a Native American chief; the town has grown up around its river’s heritage. The Kennebec River rushes through the town and, with time, centuries of different peoples lived along its banks. The American Indians saw the river as a life-giving force, bringing fresh salmon to their communities. Settlers farmed along the shores, and loggers floated thousands of logs downstream to mills and boat builders. Recently, Skowhegan’s manufacturing base closed its doors. Once again the river is helping the community recover, for Run of River is preparing to make the rapids into a $1.5 million whitewater park in the Kennebec Gorge behind downtown stores.

The plan includes purchasing land along the Kennebec to assure public access, installing viewing sites, running boaters up and down the gorge, and creating new opportunities for flat-water rafting from Oosoola Park in Norridgewock to Shawmut. It’s projected that the park will become an Olympic training ground for whitewater sports.

The old junior high will be transformed into a hotel. A new golf course is being built on U.S. Route 201, and there are plans to turn the former Solon Manufacturing factory into condominiums.

Broadband internet is being offered at reasonable costs by Mainly Wired through their offices in Skowhegan and Swanville. Because of broadband, companies can do business anywhere in the world, and with Maine’s quality of life, more are locating in the state.

It’s no wonder that two new businesses have opened up recently. The unique thing about them is — how unique they are. They are breaking the traditional mold for the type of business Skowhegan has had.

And that’s one reason why they should be successful.

People across the state are reclaiming their downtowns as places to live, work and play. Malls are still popular but are losing prestige, especially amongst baby boomers. This demographic is on a quest for the quality of life, and for many of them that means being able to have access to a downtown that has unique stores, cafés, restaurants, and places to entertain them. They want to live in a real community and shop in one.

This is part of the creative economy in action.

“A lot of people here don’t understand what they have here, but I come from the outside and I’ve seen how it’s happening elsewhere,” said Dave Ellis, who just opened up his store, Wish, in Skowhegan. Ellis lived in Portland five years ago and witnessed its transformation. Now he lives in Augusta and is witnessing similar changes taking place. He understands Skowhegan has the same elements in motion, along with the whitewater park, that will successfully transform the downtown into a destination spot. “It’s inevitable that it will happen here.”

Wish is a one-of-a kind store, offering quality home furnishings that reflect the owner’s life. For a while Ellis sold orchids in Florida, and he is a trained professional potter. He loves to collect antiques, and was a former director of a company that sold handmade tiles. The old-and-new combination reminds Ellis of his home, which is something he feels he has in common with most homeowners in Maine.

“It seemed like a natural progression for me to own a home-and-garden shop,” said Ellis.

The instant you walk into Wish, you feel that you’ve come home. The relaxed, easygoing atmosphere is transcendent, and that’s because of the unique combination of what Ellis sells.

“In this short time I already feel that I’m part of a community. There’s a whole network of people here helping each other,” said Ellis. The programs in Skowhegan have helped him get the word out about his business and feel welcome.

“Downtown Skowhegan has a lot of energy with the Maine Street program, so I felt it was a great place to start a business. I had to be somewhere historic, and I love all the old towns in Maine that are on the river,” said Ellis. “It is happening here.” 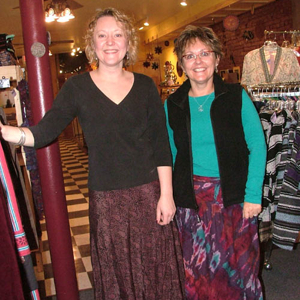 Peace Tree is a mother–daughter boutique that sells stylish jewelry, cloths, and knickknacks reminiscent of the late 60s but brought forward in time to enrich our times. The minute you walk in the door bright colors stimulate your senses and entice you to look around.

Susie Lord and Angie Olson-Soll decide on all the retail items together and truly work as a team. Olson-Soll previously worked in a doctor’s office and a retail store. “Being here is like a dream come true,” said Olson-Soll.

Lord is a mother of four who owned and operated a daycare for two years. About six years ago the ladies began talking about what they’d really love to do, and the concept for Peace Tree was born. They opened their doors in October. “It was absolutely the right time,” said Lord. “The community has been very welcoming — we’re excited.”

They sell a number of unique, quality goods by local artists, from jewelry made in Madison and Waterville, to hand-painted stones. These stones are gems in their own right, as the artist Desiree Dow paints faces on them, following the contours of each individual stone.

“Becky Dion, of the Downtown Business Association, has been a tremendous support,” said Lord. Dion owns The Blueberry Cupboard, a high-quality home-furnishing store, and believed in Skowhegan’s potential long before any development plans were made. She was a founding member of the Downtown Business Association and is chair of the Promotion Committee, serves on the board of the Maine Street program, and continues to work endlessly to make her vision of Skowhegan’s potential in the creative economy come true.

“The Maine Street project is a shinning star,” said Dion. “With Audrey Lovering as our downtown manager, we are accomplishing a lot. In the spring we will have plantings and benches, sprucing up the downtown.”

This time next year, because of the Maine Street program, Skowhegan will also have new lighting, new landscaping, and a new community building, including public restrooms.

Lovering said that it’s important to actively attract artists from the area to become involved in the town’s revitalization. Step by step, that is happening.

That’s something Katie Ouilette has been working on for years. “I just love my community. It’s got SO much potential,” said Ouilette. With seemingly boundless energy, Ouilette never stops promoting Skowhegan, runs a local cable-TV show, and is the author of the children’s book, Two Birds in a Box. She wrote the initial proposal for Skowhegan to be designated as a Maine Street town, and over the years she has brought artists from the area together to display their work downtown for the holidays.

“Many of the downtown businesses have Maine-made products. I have a woman who makes goat soap just for the Blueberry Cupboard. And I’ve put aside an area to display local artists’ works. I carry Yankee candles and Maine-made soy candles,” said Dion. “You know, there are so many talented people in the area, and now we have more venues for them to sell their products. The more independent retail stores that are interesting, the more people will come to town to shop.”

“It’s unique in every town,” said Governor Baldacci, referring to the creative economy, which he strongly supports. He said that every area has its own special character, and that uniqueness is reflected in how Mainers are building the creative economy in individual towns. “It draws on our diversity, our cultures and traditions, and gives us a foundation and direction to grow in the future.”

That’s exactly what is happening in Skowhegan, where the river runs through it, and throughout history has brought change.