“Not only do we have a tremendous onshore resource, we also have unlimited offshore potential,” said Sue Jones of the Maine Wind Working Group, the organization that put on the conference. “With a $1.4 billion investment already, Maine is poised for $4.5 billion to be spent in the next few years. Maine is on track to become a national wind-power leader. No other industry in Maine can compare to the wind industry, as far economic development. This is about businesses, jobs, and the environment.”The goal of the conference was to educate people about the state’s wind industry.

Based on government analysis, the Atlantic Ocean has significant offshore wind potential, with over 212 gigawatts of wind resources in shallow waters alone — and many times that amount if deeper waters can be developed. So much more, according to Dr. Habib Dagher, director of the University of Maine’s composite laboratories, we’ve hit the energy jackpot. 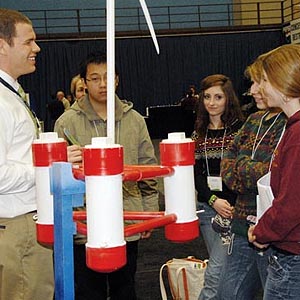 A graduate research assistant, Seth Swanberg, from the University of Maine explains the floating wind turbines to students. UMaine has programs for highschool students to design windblades and floating turbines. photo by Ramona Du Houx

“When Texas discovered oil, they looked at the best ways to get it out of the ground. We are no different here. We’ve identified 149 gigawatts of wind energy offshore — that’s 50 nuclear power plants worth of energy off the coast of Maine. It’s our duty to figure out how to best harness this energy cost effectively. That’s exactly what we are doing,” he said.

If all goes according to plan, deep waters, 20 miles off the coast, will become sites for floating wind-turbine farms — the first in the world. Located beyond the horizon, they won’t be visible from land. Floating turbines gives the UMaine team major advantages over fixed-base offshore turbines; they can be deployed more easily — imagine a bottle that floats, versus a pillar that has to be dug into the ground — they can be positioned in deep waters, and they are more cost effective.

UMaine received Recovery Act funds to further its state-of-the-art research, testing, and the development of floating offshore turbines. In April three designs will be deployed for analysis. In July 2012 the first floating, offshore, wind turbine will be erected near Monhegan Island, one of the three sites that have been chosen for experimental wind turbines.

Governor Baldacci’s Wind Energy Task Force and his Ocean Energy Task Force laid the groundwork for wind development offshore and on land. Lawmakers voted unanimously for these efforts; they recognized that 15,000 jobs could be created with the offshore-wind plan alone. Maine’s floating offshore wind-farm plan would produce 5,000 megawatts by 2030, enough energy to power an estimated 1.5 million households, annually.

“Maine has taken many important steps to lay the groundwork for leadership in offshore wind, including important legislation on siting, permitting, and leasing,” said Parker Hadlock of Cianbro. “The state has designated test sites, supported research and development at the University, and issued a Request for Proposals for the first commercial project.”

Companies from Europe and China have expressed serious interest in developing the wind farms. Some have submitted proposals to Maine’s Public Utilities Commission.

Maine is a perfect location for the deployment of offshore wind platforms. Maine’s industries are geared up and have been retooled to deploy the turbines. UMaine has been chosen as the lead researcher, because of the composite center that will be utilizing their expertise to build lighter, yet stronger and more durable turbines. Two consortiums, the Maine Wind Industry Initiative (MWII) and the DeepCwind consortium, represent over 30 companies, like Cianbro and BIW, nonprofits, and government entities.

“Maine is on the move,” said Williamson, MWII executive director. “If we can continue on this path, offshore wind will present an even larger opportunity to grow Maine’s economy.”

Williamson sited Germany as an example and said, “They ignited their economy, retooling it to build turbines. Now, they don’t have a lot of wind projects in Germany, but the British do. And it’s the Germans who have the expertise and businesses to supply Britain. Maine can do the same for America.”

Off European shores, 984 wind turbines are producing energy. There are no offshore wind farms in America, yet. There are no floating offshore wind farms in the world, yet. The market for Maine’s new technology on a worldwide scale could be huge. And Maine could be the key manufacturer, being ideally positioned on the coast to ship the floating turbines around the world, using the state’s deepwater ports.

“Searsport is now the tenth largest port in the U.S. for wind-turbine imports,” said Patrick Arnold of the Maine Port Authority. “If Maine achieves its vision of major offshore wind development, it will be great news for our ports, and all the skilled workers, companies, and infrastructure we have along the coast.”

Besides Searsport, Maine’s other deepwater ports are at Eastport and Portland. Seventy acres of land at Mack Point are available for wind-turbine assembly.

Maine currently leads New England in the development of land-based wind farms, producing 95 percent of the region’s wind energy. Those projects employed Maine companies like Reed & Reed to erect the towers. The state’s land-based wind goal is to have at least 2,000 megawatts (MW) of installed capacity by 2015. 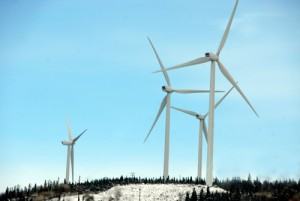 The most successful and the biggest community island wind development in America is Vinalhaven. In 2006, rates on the island of Vinalhaven were nearly 32 cents per kilowatt-hour, twice the cost that mainlanders were paying at the same time. The time had come to invest in a community wind project. The community voted 382 to 5 in favor; history was made, and the island was on the path to becoming energy independent.

The three 1.5 megawatt turbines generate 4.5 megawatts, more than enough power for the demands of islanders. The project is displacing 150 tons of carbon per week and saving residents money.

At the conference, smaller wind turbine producers were on display. Camden High School intends to erect a turbine with money raised by students. There was even a two-blade system.

“Our 1 MW wind turbine technology was developed by the Swedish government in the 1970s. The significant weight savings we can realize with a two-blade design allow for material savings on installation and lower upfront capital costs,” said Mike Kelly of Nordic Windpower. “Not only is our turbine more economical for on-site generation and small and community wind-farm projects, it is also more sound efficient. Our two-blade technology allows us to produce a turbine that is approximately 20 percent more quiet than an equivalent three-blade design.”

Efficiency Maine gives rebates for erecting turbines. There is even a Wind Turbine Buyers Guide at: http://www.homepower.com/files/featured/TurbineBuyersGuide.pdf.

Right now, some policy makers in Maine are worried about wind power not generating savings. European countries have proven that the more wind turbines are erected on- and offshore, the more electricity costs go down.

“The data we have so far shown our costs are where they need to be, which is eight to ten cents a kilowatt hour by 2020,” said Dagher. “Our goal is for this technology to become cost competitive with other sources of energy in Maine in a 2018-2020 timeframe. If you decided today to build other forms of energy, like nuclear or a coal, you’re going to have to wait that long anyway. So, when we start to make the choices today for what energy we put online, we need to be thinking of what the price of energy will be in that 2018-2020 timeframe.”

With more turbines and other alternative-energy sources, electricity prices are predicted to go down.

“Mainers can beat our dependence on oil, gas, and coal by embracing our enormous opportunity for clean, wind energy,” said Dylan Voorhees of the Natural Resources Council of Maine. “The price of natural gas determines our energy costs in Maine. It fluctuates. Wind energy is stable.”

While Gov. Baldacci embraced wind energy, we don’t know what Gov. LePage will do.

Since the conference, in February, The University of Maine’s Advanced Structures and Composites Center and the DeepCwind Consortium released the Maine Offshore Wind Report. The study answers questions with scientific research about the offshore wind energy project. The report is available for download online at: DeepCwind.org/offshorewindreport.