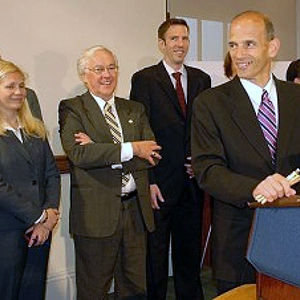 Maine Gov. Baldacci signs the energy bill that puts the state on the road to energy independence. Photo by Ramona du Houx

Thousands of homes to be weatherized, jobs created, and energy transmission progresses

A new law establishes a state energy agency, which will direct tens of millions of dollars into weatherization, conservation, and efficiency programs. The Efficiency Maine Trust and Board will be designed to organize the state’s numerous energy-related programs together under one roof and launch an unprecedented effort to transition Maine’s economy from its dependence on oil to alternative energy sources. In the process, thousands of jobs could be created.
Over 80 percent of Maine’s homes and businesses heat by oil. Until now there hasn’t been a comprehensive law to help residents and businesses cut heating costs with weatherization programs available to all citizens.

“This law sets the course for ambitious and achievable measures to reduce the stranglehold of fossil fuels on our pocketbooks and environment,” said Governor John Baldacci. “The energy efficiency component in weatherization is huge; this bill has a 20-time increase in weatherization. We will weatherize 100 percent of homes and 50 percent of businesses by 2030. The bill is sweeping in its scope. We are going to be putting hundreds of people to work to gear up for this fall and winter.”

The state’s focus, promotion, and implementation of weatherization goals should catapult more private investment into the alternative energy sector.

“We’re thrilled that the committee has developed a bill that sets the stage as to how we will handle the state’s energy needs in the future,” said Rep. Jon Hicks, who sat on the committee that incorporated six bills into this comprehensive plan that is now law. “It prepares us to help develop more green energy jobs.”

Thousands of jobs in companies that insulate and inspect homes are projected. Training for these areas of expertise is underway.

“People need an easy, friendly approach to energy efficiency. Studies show some people do energy audits but then tend to put them on a shelf. The new law will provide a one-stop shop,” said Karin Tilberg, of the Governor’s Office. “Contractors, auditors, and renewable energy companies are getting going, so it’s a big economic driver as well. We want to send a strong signal that Maine is open to businesses and interested in renewable energy.”

Companies that manufacture and install alternative energy products that produce electricity could establish themselves in the state with the confidence of knowing energy corridors are planed that will transmit their product to the hungry New England electricity market.

“Energy is a large focal point for our state and nation. This law will help maximize the value of the corridors,” said Baldacci.

The governor outlined his goals for this initiative during this year’s State of the State address. He recognized early on that renewable energy was an area of growth that needed to be focused on. He brought back the Office of Energy Security and Independence and, by setting an example with state offices, reduced energy costs, bought hybrids for the state fleet, started van pooling, and established rebate programs for solar and wind energy.

Those rebate programs, run by Energy Efficiency Maine, have received additional funding from recovery act stimulus funds. In fact the next two years of initiating the weatherization program will be funded by recovery stimulus funds with over $60 million. Funds from the state’s cap-and-trade program, The Regional Greenhouse Gas Initiative, will also be utilized as well as an ongoing surcharge on electricity use.

“Maine’s future economy is closely tied to what we do with energy. How we handle energy and conserve it will make sure Maine people pay as little as necessary in order to meet their needs at work and at home. This legislation moves both these issues forward by immense measures. In the process we will clean up our environment by the amount of fuel that we use,” said Dick Davis, the state’s public advocate. “It’s a win all the way around.”

• Weatherize all residences and 50 percent of businesses by 2030.
• Reduce peak electric energy consumption by 100 megawatts by 2020.
• Reduce the state’s consumption of liquid fossil fuels by at least 30 percent by 2030.
• Build private-sector jobs in clean energy businesses.
• Reduce greenhouse gas emissions.
• Achieve reductions in usage of electricity and natural gas by 2020.

A fund is established to build and rehabilitate affordable housing, making them more energy efficient, affordable, and available. Maine State Housing Authority will set up a new program to build and rehabilitate affordable rental units and replace older manufactured housing. Money would come from revenue bonds and a portion of the state’s real estate transfer tax to fund this portion of the law.

“This measure frames the direction of energy policy in Maine over the next decade,” said John Kerry, the state’s energy office director. “It’s a major part of the state’s comprehensive energy policy.”

Senate Majority Leader Philip Bartlett, who co-chaired the committee, said, “The bill puts in place a roadmap to achieve energy independence in the state.”