Rhode Island developer Paul Boghossian was no stranger to Waterville, having attended Colby College. It was that connection, reignited by Ave Vinick, that led him back to his alma mater’s hometown. Vick told him about the Hathaway property sitting empty. Boghossian was renovating buildings in Rhode Island because of the historic tax credits offered; Hathaway looked like a gem in the rough to him.

Three years later, after partnering with Tom Niemann of Niemann Capital, the team completed the purchase of the Hathaway shirt factory and held a groundbreaking last January. The entire Hathaway complex will include the two adjacent old mills and is part of their $65-$70 million development plan.

Boghossian and Niemann not only will renovate the Hathaway complex, which will include the former Marden’s building and the CMP building, they intend to help transform the city into an art and cultural hub by making the Hathaway complex a destination for thousands of visitors who want to experience the arts first hand. A boutique hotel, museum, cultural center, and college housing are planned. This thriving center with river access will include recreational trails and a pedestrian connection to downtown.

“Essentially, we’re basing it on two models in America: the Torpedo Factory in Alexandria, Virginia, and Tamarack in west Virginia. In both locations hundreds of thousands of visitors go there to see artists crafting their work,” said Boghossian.

Last year over a half a million visitors visited Tamarack. Resident artisans work daily in observation studios, like a living museum, which has made

Tamarack a destination vacation for families and a cultural center for the arts. West Virginia estimates an economic impact of $51 million in goods and services to date due directly to Tamarack.

Waterville may just be destined to become the Left Bank of Maine. 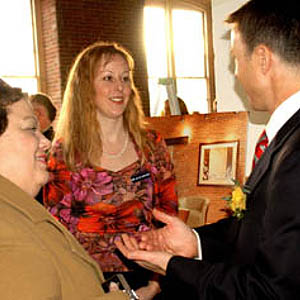 “We’d like to thank Bank of America and Colby College for their important roles in financing for this project. We are also deeply grateful to the governor, our federal and state legislative delegations for their leadership and support of the federal New Market Tax Credit Program and the State Historic Tax Credit for this project,” said Tom Niemann at the groundbreaking in January. A $6 million Historic Preservation Tax Credit, legislation sponsored by Sen. Lisa Marrache for the project, will provide a tax break of up to that amount over the next six years to support the mill’s redevelopment.

Old mill buildings are turning into engines of growth in their new incarnations across America; now it could be Maine’s turn.

In North Carolina, Niemann Capital renovated a mill, bringing back the intrinsic beauty of the building, in a $1.2 million project called West Village. The project brought almost a thousand jobs and a thousand residents to downtown Durham. Niemann hopes to duplicate that success, not just in Waterville, but in towns across the state with different projects. Last year his company purchased the Arsenal in Augusta.

“These projects wouldn’t have been possible without historical preservation tax credits,” said Niemann. “Niemann Capital specializes in the revitalization of historic structures emphasizing protecting community assets on Main Street or in walking distance of historic districts and downtowns … Since 2003, I’m happy to report our company has grown and we are now a North Carolina and Maine based business. I came to Maine in 2003 and fell in love with Maine; its people, its resources, its open places, its history and its historic buildings. We believe Maine is a great place to do business.”

The new historic tax credit bill under consideration in Maine says the owner of a certified historic building who wants to renovate it for use as an income-producing property would be eligible for a tax credit equal to 25 percent of construction costs, spread over four years. The historical preservation tax credit would help turn these historic gems into economic centers in Maine’s downtowns by making renovation more attractive to investors than building strip malls.

“For a modest investment, we can attract millions of dollars worth of growth, bringing new jobs, new revenues, affordable housing and new life to our cities and towns,” said Governor Baldacci about the historic tax credit bill during the groundbreaking. “The Hathaway shirt factory has done more than come back to life. Its renovation is bringing the community together further. It represents the heart and soul of the community. My grandmother was from Waterville. She used to make a dish called Lebon, it’s like yogurt, you had to use the culture from the previous batch to make a new batch. She would always remind us never to forget our foundations. Culture and traditions are we what need to have as a foundation as we move ahead. We have that in the community resources of Waterville. The city has made lasting partnerships that have reinvigorated downtown.”

The Hathaway Center had many of these community partners assisting the project. Waterville Main Street’s promotion of the project helped the developers get to know the community.

The Main Street program has been working to bring the community together and make the city an attractive venue for visitors and businesses. Their focus is to help develop the downtown into a thriving, commercial, social and cultural entertainment destination. They have sponsored and participated in community events like A Taste of Waterville, where participants enjoy tasting the delicacies made from different Waterville restaurants, the sidewalk art show, a myriad of other community events, and various shows at the opera house.

Shannon Haines, director of Maine Street Waterville said, “The vibrant mix of housing, retail and offices, with a strong focus on the creative economy, augments our downtown. This is a huge turning point of our city.”

“Main Street really has been instrumental to this project,” said Boghossian. “Their focus is aligned with ours. One of the really compelling things about the Hathaway is it’s proximity to downtown. It’s so convenient for residents. To be able to have such diversity in restaurants, a theater and unique stores in walking distance from a home is great. I think it will help get more people to move back downtown. We’re going to see a resurgence of interest in downtowns.”

Colby College, offered a $1 million loan to help finance the plan and put in $60,000 toward the $350,000 purchase price. MaineGeneral Health, which plans to move its HealthReach offices to Hathaway, represents 260 to 280 employees who will be working there. The Hathaway developers have hired a Maine construction company to work on the facility and want to use Maine goods and services whenever possible.

The building is one of several cotton mills constructed along the river by the Lockwood Company in the late 1800s before it was turned into the manufacturing headquarters of he Hathaway Shirt Company.

“That transformation of turning Hathaway into its second life will be every bit as productive and vibrant as its previous life, if not more so. In order for a downtown to be vibrant, people must be living and working there,” said Boghossian. “That’s what we are creating here. Certainly, by this time next year we’ll have people working and living in the Hathaway building. There will be offices open before that. I’d like to have the apartments ready by September of next year.”

The first phase of the transformation will see some of the tenants moving in this fall. When the development is complete, about 1,000 people will be living and working at the mill complex.

Besides HealthReach, tenants for the Hathaway building include three radio stations, The River 93.5, Mix 107.9, and a morning talk sports station, plus a financial services company, information technology firms, a salon and spa, and 66 apartments. Restaurants and a brewpub are also possible tenants.

The apartments range from studios to three-bedroom units averaging 800 square feet in size with an average rental price of $880 a month. Before the sale went through, Boghossian said he had a list of over 130 names of people who have expressed interest in renting an apartment.

“Within 18 months, work will start on phase two — renovations of the adjacent Central Maine Power Co. and Marden’s Surplus & Salvage buildings. The Marden’s building is targeted for a small hotel and more apartments; and the CMP buildings are projected to become a destination place with artisans, a marketplace, conference space, and museum,” said Boghossian.

Today people can choose where they live because of internet jobs. As a result Maine is experiencing an in-migration, to a large degree because of our natural beauty; add renovated mills for people to move into, and the state’s character and quality of life is enhanced. Maine has millions of square feet of unused mill space, much of it in 19th-century brick buildings. In many states these historical, industrial buildings mostly overlook rail yards on the outskirts of cities; Maine’s buildings are in downtowns, often beside a river, like the Hathaway Center.

“Today is a great milestone for the vision of the Maine Historic Preservation Commission,” said Chris Glass of the MHPC. “Here on the bank of one of our mighty rivers, in a city whose name acknowledges its debt to that river, is where one of Maine’s important mills begins its transformation to a new identity. It should be an example for the rest of the state, and the policies that made it happen here should be spread throughout the other cities and towns where other opportunities are waiting to happen. All of us, whether we are in business or in government, must recognize the importance of this event and make sure it is not an isolated success.”

A century ago, Maine’s industrial buildings and downtowns helped to fuel the economy. They have a chance to play an even greater role now, as they are renovated and invigorate the economy, while adding value to Maine’s quality of life.