Academy Award-winning director Jonathan Demme is introduced before his Talking Heads movie, in film not digital, screened at the MIFF. Photo by Ramona du Houx

Discovery, that’s really what the Maine’s International Film Festival, (MIFF) is all about -making discoveries.

There are a wide range of movies to entertain and enlighten any person who wants to find something to stimulate their mind. MIFF is a destination that brings cultures from around the world together in central Maine for ten days. Assumptions, presumptions cause discord and films that open the doors of reality are the stock and trade of MIFF.

“I love Waterville. I love the Maine International Film Festival and it’s so great to be here,” said the seasoned director.

The opportunity to meet directors, producers, writers and even some actors presents itself in a way that doesn’t occur in other film festivals around the country. A lot of this process has to be credited to the founders of MIFF and the community in which the event is held.

Take for example the movie, Stop Making Sense, the 1984 concert of Talking Heads. A new generation was able to listen to and became energized by a band whose work is perhaps more relevant today. Many in the audience, which included mayor Karen Hick, got up and danced the night away with the Talking Heads. The director, Demme, was on hand to greet patrons and an unscheduled event happened after the movie.

Waterville mayor, Karen Heck, and others dance with the Talking Heads movie at MIFF. photo by Ramona du Houx

While in Portland on his way to Waterville, Demme dropped in to hear a hip-hop band Indigenous Immigrants. They were totally unaware this unassuming gentleman who enjoyed their music, that challenges societies norms, won an Oscar in 1991 for “The Silence of the Lambs.” The next day the band, from Waterville, received a call and they were asked if they could perform live after Stop Making Sense because Demme had invited them.

They knew following Talking Heads wasn’t going to be easy but they put on a show the audience will not soon forget and throughout it all Demme was behind a video camera recording them.

This year’s Mid-Life Achievement Award honoree is actor, songwriter and producer Keith Carradine, who won a Golden Globe and Oscar for best original song for “I’m Easy” from 1975’s “Nashville.” He we be on hand to receive the award Monday, 6:30, at the Waterville Opera House and at a party in his honor held later that night.

It’s exciting after a movie when you overhear people who have realized something new or that their opinions have changed because of a film. It’s mind blowing when it happens to you, as it did to me. 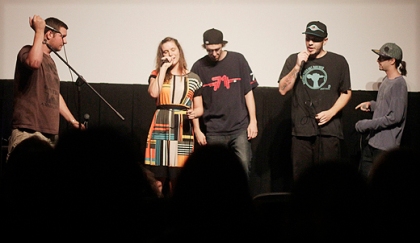 Indigenous Immigrants perform at the Maine Film Festival after having been invited by Johnathan Deeme.