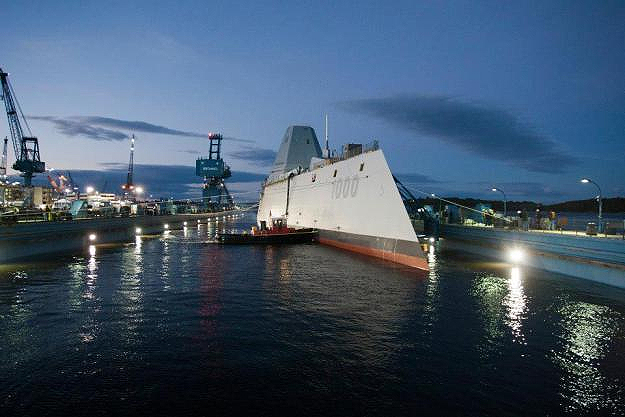 She floats! the USS Zumwalt 1000 in the water for the first time on the Kennebec River. photo courtesy Bath Iron Works

Bath Iron Works successfully launched the Navy’s first Zumwalt-class destroyer Oct. 28 at their Bath, Maine shipyard. The ship began its translation from Bath Iron Works’ land-level construction facility to a floating dry dock on Friday. Once loaded into the dry dock, the dock was flooded and the ship was removed from its specially designed cradle. By late Monday, the dock had been flooded and the ship was floated off and tied to a pier on the Kennebec River.
“This is a big day for the men and women of BIW who have launched the most technologically advanced ship the Navy has ever built,” said Congresswoman Chellie Pingree. “And they did it on time and on budget. This is another reminder of why BIW is home to the best ship builders in the world.”

The Zumwalt is the largest destroyer the Navy has ever built, and first in its class. The ship is innovative, featuring electric propulsion and a design that makes it hard to detect on radar. Even though the ship is bigger than previous generation destroyers, it operates with a much smallercrew of 178.

Pingree says the christening, or naming ceremony, will take place in the spring. 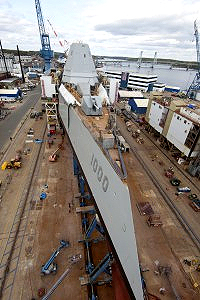 The 1000 being built by Bath Iron Works. courtesy photo

“With the government shutdown it was impossible for the Navy to do what it needed to get the Zumwalt family to Bath and put on a christening ceremony,” she said.

The future USS Zumwalt (DDG 1000) will be the lead ship of the Navy’s newest destroyer class, designed for littoral operations and land attack.

“This is the largest ship Bath Iron Works has ever constructed and the Navy’s largest destroyer. The launch was unprecedented in both its size and complexity,” said Capt. Jim Downey, the Zumwalt-class program manager for the Navy’s Program Executive Office, Ships. “Due to meticulous planning and execution, the operation went very smoothly. I’m extremely pleased with the results and applaud the combined efforts of the Navy-industry team.”

Construction began on DDG 1000 in February 2009, and the Navy and its industry partners have worked to mature the ship’s design and ready their industrial facilities to build this advanced surface combatant. Zumwalt is currently more than 87 percent complete, and the shipbuilder will continue remaining construction work on the hull prior to planned delivery late next year.

Because of the complexity of the first-of-class ship, the Navy will perform a two-phase delivery process. Bath Iron Works will deliver the ship itself to the Navy in late 2014. Upon delivery, the Navy will then conduct combat systems activation, tests and trials, to include multiple underway periods. The ship is expected to reach its initial operating capability in 2016.

The ship, the first of three Zumwalt-class destroyers, will provide independent forward presence and deterrence, support special operations forces and operate as part of joint and combined expeditionary forces. The Navy has incorporated many new technologies into the ship’s unique tumblehome hull, including an all-electric integrated power system and an Advanced Gun System, designed to fire rocket-powered, precision projectiles 63-nautical miles.

The shape of the superstructure and the arrangement of its antennas significantly reduce the ship’s radar cross section, making the ship less visible to enemy radar at sea. The design also allows for optimal manning with a standard crew size of 130 and an aviation detachment of 28 Sailors thereby decreasing lifecycle operations and support costs.

The Zumwalt-class guided-missile destroyer DDG 1000 is floated out of dry dock at the General Dynamics Bath Iron Works shipyard. The ship, the first of three Zumwalt-class destroyers, will provide independent forward presence and deterrence, support special operations forces and operate as part of joint and combined expeditionary forces. The lead ship and class are named in honor of former Chief of Naval Operations Adm. Elmo R. “Bud” Zumwalt Jr., who served as chief of naval operations from 1970-1974. (U.S. Navy photo courtesy of General Dynamics/Released)

The lead ship and class are named in honor of former Chief of Naval Operations Adm. Elmo R. “Bud” Zumwalt Jr., who served as chief of naval operations from 1970-1974.

“Not only did Admiral Zumwalt serve bravely in combat, but as head of the Navy he fought to allow women to serve on ships and worked to overcome racial inequality in the service,” Pingree said.

As one of the Defense Department’s largest acquisition organizations, PEO Ships, an affiliated PEO of the Naval Sea Systems Command, is responsible for executing the development and procurement of all major surface combatants, amphibious ships, special mission and support ships and special warfare craft.

The ceremony in the spring will feature the two daughters of Admiral Elmo “Bud” Zumwalt, served on destroyers in World War II and was Chief of Naval Operations under President Nixon.

The Zumwalt is over 600′ long, about 100′ longer than the current class of destroyers.