The new laboratory will be the only such facility in the United States to include complete development capabilities for designing, prototyping and testing large structural hybrid composite and nanocomposite components for the deep water offshore wind energy industry.

The funds will enable the Center to build and test offshore wind technologies in the laboratory before putting them in deep water. Funds will also enable the center to develop nanocomposite materials, using Maine’s abundant wood supply to manufacture composite material that will be stronger than steel, and thereby increasing the potential capabilities and markets for composites.

“The University of Maine Advanced Structures and Composites Center has been central to our vision of increasing manufacturing and technology jobs here in Maine, promoting renewable energy production, and growing the economy and jobs in the State,” said Governor Baldacci.

“I am pleased that the Federal government has again recognized the work of Dr. Habib Dagher and his team. The Center plays a vital role in realizing Maine’s potential for deep water offshore wind generation and Maine’s ability to become more energy independent.” 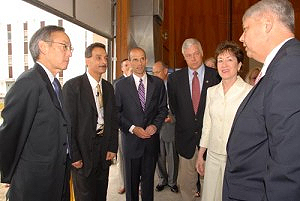 DOE Sec. Steven Chu stands next to Dr. Habib Dagher at the AEWC laboratory with Gov. Baldacci and the Congressional Delegation. After his visit Maine was granted millions for R&D at the lab. Photo By Ramona du Houx

“This is another important step forward for clean energy development and job creation in Maine,” said Congressman Mike Michaud. “The research conducted at the new lab will complement the cutting edge advancements being made at the University of Maine and position our homegrown clean energy industry for future growth. This project represents a win for the local economy with the construction jobs that will be created. It is also a longer-term shot in the arm for Maine’s economy and will capitalize on the potential our waters hold for offshore wind energy production.”

Maine has been recognized as a leader in wind energy development. There are currently 300 megawatts operating or under construction in Maine, with another 450 megawatts of wind in various stages of development throughout the State. Already, Maine is home to 95 percent of the operating on-shore wind capacity in New England.

The Governor said that the potential of our offshore wind resources is even greater, estimated at 100 gigawatts, or three-to-four times the current peak demand for all of New England.

Last October, the U.S. Energy Department awarded the State $8 million of Federal Recovery Act funds to expand efforts to develop offshore wind capacity. This grant represents the foundation of an effort that will lead to the deployment of the first 25 MW floating “Stepping Stone” ocean wind farm in the world in 10 years

In December, the Baldacci administration named demonstration sites for offshore wind technology located in Maine coastal waters. Three sites were identified by the process, which included reviewing the geography of the coast to meet certain parameters and extensive meetings with stakeholders. The University of Maine will be using the site off Monhegan Island for its testing. The University has the goal for the first demonstration turbine to be operating in the water in 2011.