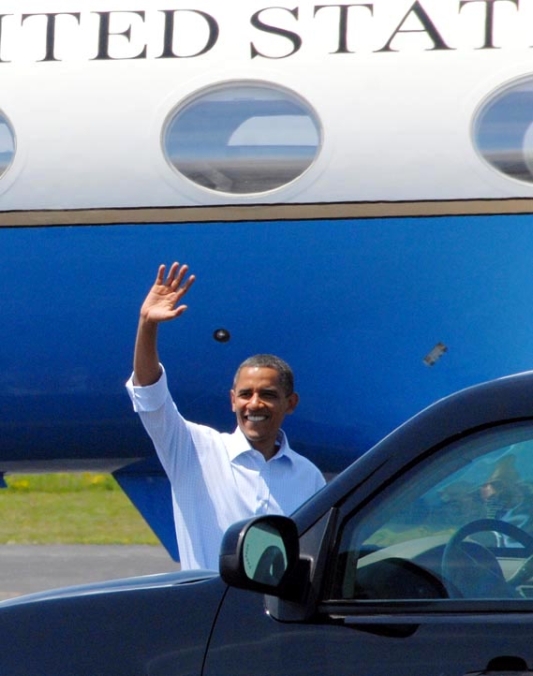 Governor John Baldacci, his wife, Karen, and Congressman Mike Michaud welcomed President Barack Obama and the first family on the tarmac. Baldacci let him know the best places to eat lobster, what to see, and invited him to play golf. 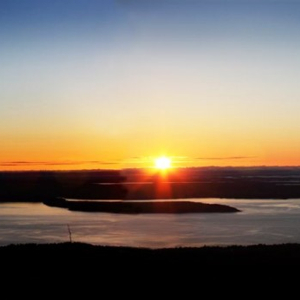 “He said that he was really looking forward to this,” said Governor Baldacci. “His visit is an opportunity to showcase Maine to the nation, and the world, it’s very exciting. I told him it was a great shot in the arm for us and he said he intends to have a great time.”

They presented the first family with several bags of Maine made gifts, which included: traditional baskets made by Passamaquoddy tribal weavers, Maine books, stuffed loon and chickadee toys for the girls and L.L. Bean bags, University of Maine hockey caps, and popcorn from East Corinth.

“Maine is the Disneyland of the natural world. It’s a wonderful place to vacation,” said Baldacci. “I’m convinced once they experience Maine and our people they will want to come back again and again.”

Congressman Michaud didn’t let the president escape from politics as he took the opportunity to ask him about the need for the Aroostook County railroad to start running again. “The Governor has been great working to get the railroad running, and so have the people of Maine approving the bond issue. But we’re not out of the woods yet,” said Michaud. “I just wanted it to be on the Presidents radar, and to wish him and his family a great trip.”

President Obama ready to relax in Maine with his family on the tarmac in Trenton, ME. Photo Ramona du Houx

The presidents get away comes on the heals of Congress passing financial reform legislation. Last spring after long debates Congress enacted health care reform. Pending issues have canceled other vacations. His visit to Maine is a family holiday.

Obama is the first sitting president to visit the Bar Harbor area since Taft.

The Obamas went straight to Acadia National Park where they biked some of Acadia’s carriage roads and toured the summit of Cadillac Mountain. In the park he was sure to see a large sign on a newly paved road, which gives credit to Recovery Act funding.

The Maine break shows the president as a family man at heart. As the press watched at a distance, he laughed with his daughters and held Michelle’s hand.

Afterward they went for a short cruise of Frenchman’s Bay.

They enjoyed Maine ice cream at Mt. Desert Island Ice Cream. Recently the company took advantage of a loan funded by the Recovery Act to open a store on Exchange Street in Portland, hiring approximately 10 people to work there.

“I’ve wanted to expand into Portland for years,” said Linda Parker, owner of Mt. Desert Ice Cream. “The ARC loan helped make that possible.” The America’s Recovery Capital (ARC) Loan Program is administered by the Small Businesses Administration and was created by the Recovery Act to provide up to $35,000 in financing to small businesses.

And for dinner the Obamas had lobster at Stewman’s in downtown Bar Harbor. Everywhere they went the Obamas patiently greeted people.

Crowds lined the streets hoping for a chance just to see the president and his family. Welcoming signs were hung in businesses, and along the streets.

“We saw him, I got a photo of him,” said Jill Doavan a student at UMO. “Its exciting that he chose Maine to visit. I hope they will return.”

Kevin Miller of the Bangor Daily News, representing Maine in the White House Press Pool, contributed information to this report.

Whale watching off the coast of Maine is something the Obama’s may do. Photo by Ramona du Houx