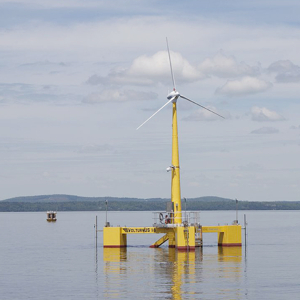 Maine’s VolturnUS offshore floating wind turbine could be key to the President’s plan of curbing global warming as he called for increases in alternative technologies, made in America. The VolturnUS is designed and manufactured by UMaine and has already received federal grants. photo by Ramona du Houx
On June 25th, President Barack Obama made a historic speech when he unveiled a significant new plan that would help America tackle climate change, spur economic opportunities, and help protect the health of Maine people and all Americans.

The President’s proposal, that doesn’t require Congress to act, would limit carbon pollution from all power plants, set improved energy efficiency standards for appliances and buildings, boost clean renewable energy, and help Americans, businesses, and communities deal with the effects of climate change. America would also take a lead internationally with diplomatic measures and treaties.

“So today, for the sake of our children, and the health and safety of all Americans, I’m directing the Environmental Protection Agency to put an end to the limitless dumping of carbon pollution from our power plants, and complete new pollution standards for both new and existing power plants.”

“Cleaning up pollution is not only good for the environment and our health, but it’s good for the economy too,” said Congresswoman Chellie Pingree. “Tackling climate change by focusing on pollution from power plants is going to encourage the development of new sources of clean energy like the wind and tidal power being developed in Maine. As part of RGGI, Maine has already begun to address carbon pollution from power plants, but we need a national policy like the President outlined to make sure we make additional progress, and to make sure power plants in other parts of the country are doing their fair share.”

The Regional Greenhouse Gas Initiative (RGGI) was the first cap-n-trade program in the U.S. and has brought in over $33 million to the state. Negotiated under the Baldacci administration it has helped to weatherize homes and businesses and transition businesses to bio-mass generators. REGGI has helped Maine grow clean energy jobs.

In Maine, climate change is contributing to soaring temperatures, destructive sea level rise, the loss of wildlife, diseases from new invasive species, and health problems – which are only projected to get worse.

“Climate change has serious implications for people’s health,” said Paul Perkins, a physician practicing in Bath and chair of Physicians for Social Responsibility’s Climate Change Committee. “President Obama’s new plan will save lives and reduce illness and suffering. His vision is a bold step that may help to reduce heat related illnesses and death, asthma attacks and respiratory illnesses, more frequent accidents and injury from severe weather events, and here in Maine, the well documented spread of Lyme Disease.”

President Obama’s speech also included a surprise announcement on the Keystone XL tar sands pipeline, which has direct relevance to Maine. The President said that he will not approve the Keystone XL pipeline if it significantly increases carbon pollution. That’s welcome news for communities across Maine where an alternative pipeline route has been planned. Keysotne pipeline’s in other state have proven to be hazardous to the environment as the infrastructure pipelines leak and burst devastating communities with think oil.

“If we don’t do more to reduce the impacts of climate change, we all are in serious trouble,” says Mike Hurley, former Mayor of the coastal town of Belfast, Maine. “Especially coastal cities, even small ones like my home town that will bear the combined impacts of rising seas, and increased storms and flooding.”

• Support affected communities. The president’s plan will help ensure that communities are better equipped to prepare for and recover from the impacts of global warming.

“All of us who have felt the effects of global warming, or simply worried about what’s in store for our kids, can take comfort in knowing that President Obama has started to put the nation on a path toward a cleaner, healthier and safer future,” said Emily Figdor, Director of Environment Maine.

Scientists have warned that the window is rapidly closing for making the necessary cuts in carbon pollution to protect future generations from the worst consequences of global warming.

Just this week a new scientific report showed that climate change could devastate some of Maine’s most precious birds, from puffins to Bicknell’s Thrush. And, yesterday, high heat and smog led the state to issue an air quality warning for coastal Maine, recommending that people limit outdoor activity.

In Maine
· In 2012, Maine experienced a total of 40 broken heat records, and 8 broken precipitation records.
· Due to severe storms and flooding, Maine has declared disaster 18 times since 2000.
· Sea-level rise and increased precipitation could jeopardize cities’ infrastructure. Rainfall is expected to increase 20-30% by late century.

The threat of global warming is a threat to national security as third world countries will suffer significantly with water shortages, flooding and super storms. Obama also announced measures so these catastrophes might be avoided.

“Today, I’m calling for an end of public financing for new coal plants overseas unless they deploy carbon-capture technologies, or there’s no other viable way for the poorest countries to generate electricity. And I urge other countries to join this effort,” said President Obama.

“And I’m directing my administration to launch negotiations toward global free trade in environmental goods and services, including clean energy technology, to help more countries skip past the dirty phase of development and join a global low-carbon economy. They don’t have to repeat all the same mistakes that we made.”