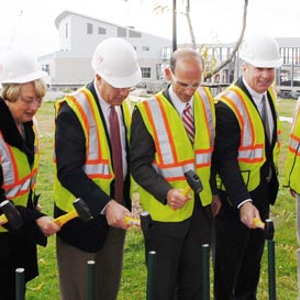 Ground breaking for Ocean Gateway II with sledge hammers to drive in pilings. In the center are Portland Mayor Mavodones, Gov. John Baldacci and Jack Reed – Courtesy photo
Portland had a record-breaking year for cruise ship visits, with 71 coming into port. Those ships bring thousands of passengers to the city, gladly spending millions of dollars locally. With the new Ocean Gateway megaberth, not only will the city accommodate larger ships, it will be able to have two ships in port at the same time.

“This next phase of the Ocean Gateway project will have significant economic impact on Portland and the entire State,” said Governor Baldacci. “This deep-water pier will enhance tourism, and increase commerce and the economic vitality of the region.”

The Governor said that tourism coming to the area from cruise ships has risen dramatically in a short time. The addition of the Ocean Gateway Pier II to Portland’s working waterfront will double the capacity at any one time for the largest of cruise and other ships to be berthed.

“The impact of Pier II will benefit the entire State, creating jobs and strengthening our ability to reach markets in the United States and around the world,” said the Governor. “The Ocean Gateway will play a key role in economic growth here for years to come.”

The project is part of the state’s Three-Port-Strategy. Portland, Eastport and Searsport are all being modified to accommodate more cargo being shipped to and from America. Railway infrastructure that connects with these ports will take trucks off the roads, and eventually carry passengers.

“This project is indeed a top priority as we look to diversify and maintain Maine’s overall transportation system,” said David Cole, Commissioner of Maine’s Department of Transportation. “We continue to enhance our public transportation options with both rail and bus service. We have improved our interstate and other major roadways, and now we stand here today celebrating the vision that was developed for expanded access to commercial vessels and cruise ships. This investment broadens our access and signals that our waterways are open for business. It is an investment that will surely pay dividends for many years to come.”

Governor Baldacci credited the work of the many local and State partners who have supported the project, and said that support from Maine voters was the critical factor in seeing the project move to the construction phase.

“The funding for this important deep-water project came from a bond question on the June ballot,” said the Governor. “That question gave voters from across the State the opportunity to weigh in on this and other critical infrastructure projects. Their approval for investment in the Ocean Gateway Pier II project shows that even in difficult economic times, Maine people support development with long-term value.”

The event was marked as the distinguished guests drove symbolic piles on the waterfront. The facility will provide fifty construction jobs and Reed & Reed has hired five Maine-based subcontractor companies.

Jackson Parker, President & CEO of Reed & Reed said, “I want to thank the City of Portland and the State of Maine for allowing us to help transform Portland’s waterfront from east to west with the construction of the Ocean Gateway Cruise Ship Terminal two years ago, this new deep water berth, and down at the other end of the waterfront, the new Veteran’s Memorial Bridge. As with all of our projects, we expect to deliver results on-time and on-budget.”

Construction is expected to be complete by July 15, 2011.