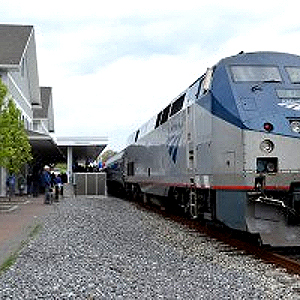 The New England Governors today announced they are working together on a coordinated regional vision for high-speed rail that will connect major cities and airports, and support economic growth throughout the region.  The Vision for the New England High Speed and Intercity Rail Network lays out key projects to strengthen passenger and freight rail service along new and existing rail corridors.  The goal is to double passenger rail ridership in the Northeast by 2030.

“Our coordinated efforts are important to the economic vitality of New England,” said Governor John E. Baldacci.  “Extending and improving our rail system will build our economy, promote energy efficiency and increase the quality of life for Maine people and other New England residents and businesses.”

The Governors have asked their Transportation chiefs to meet regularly with the New England Congressional delegation and work to advance their rail initiatives with coordinated applications for high-speed rail grants under the American Recovery and Reinvestment Act, while also pursuing other federal funding opportunities.  On Friday July 10, the states submitted pre-applications as part of the competitive grant process.  In August the states will meet in Vermont at a high-speed rail summit to continue their push for a strong high-speed rail network in New England.

“It’s significant that we’ve been able to develop a strategic, regional vision for passenger rail in New England,” said MaineDOT Commissioner David Cole. “Working in cooperation with our neighboring states, we’ll be better able to harmonize operations, position ourselves for funding opportunities, and define how we fit into the nation’s passenger rail network.”

The six key projects in the states’ vision are:

The Downeaster service, which operates on a route included in the Northern New England High Speed Rail Corridor between Boston and Portland, is a national model for the successful introduction of new intercity passenger rail service. The states along the Downeaster Route are working together to improve the infrastructure, with the goal of reducing the travel time between Boston and Portland to two hours and increasing capacity to support seven daily round trips. This project also includes the Downeaster Extension and rehabilitation of approximately 30 miles of existing rail to Class III, which will support the extension of the Amtrak Downeaster intercity passenger rail service from Portland to Brunswick, with a stop in Freeport.

New Hampshire’s Capital corridor will create easily accessible passenger rail service for more than 500,000 residents of Southern New Hampshire with stops in the cities of Concord, Manchester, Nashua and Boston.  The rail line will also stop at Manchester-Boston Regional Airport, creating a much-needed connection for tourists and travelers from across northern New England.  Eventually, this service will extend north to White River Junction, VT and to Montreal fulfilling the vision of this designated High-Speed Rail Corridor.

Vermont’s Western Corridor will provide direct service down the western side of the state connecting Burlington, Rutland, and Bennington with Albany and New York City via the Empire Corridor.

Massachusetts will return the Vermonter to its original route through western Massachusetts via the Knowledge Corridor.  This effort, supported by the State of Vermont, is a vivid example of the ongoing collaboration of two states working together to improve service and increase the number of rail passengers. The Knowledge Corridor between Springfield and White River Junction provides connection between the Boston to New Haven and the Boston to Montreal legs of the Northern New England High Speed Rail Corridor.

Through Connecticut’s leadership, the group will work double track and replace bridges on the Springfield Line that serves the cities of New Haven, Hartford, and Springfield in order to provide the foundation for the larger rail network. Expanded train service will provide key connections between New York City, Bradley International Airport and will allow further development of the inland high speed rail line between Boston and New York.

Providing the connection between Providence and Boston to TF Green Airport in Rhode Island via the Northeast Corridor as well as enhancing passenger service south of Providence will build on the long-term transportation partnership between Rhode Island and Massachusetts. In addition, Rhode Island is working with Amtrak on capacity improvements along the Northeast Corridor in Southern Rhode Island that will permit bi-directional overtakes for intercity passenger rail, benefiting all users of the corridor while providing for future commuter rail infrastructure at Kingston Station.