Groundbreaking in Auburn, Maine for a railroad expansion that will generate economic growth in the region. Voter approved bonds were approved for the project but have not been allocated by the LePage administration. The DOT had to find $5 million for the project to get underway. photo by Morgan Rogers

Officials broke ground to celebrate the expansion underway of a freight rail line in the Lewiston-Auburn (L/A) area at the intermodal facility on April 17th. Community organizations, businesses and government officials were excited by the economic development potential that the project is projected to bring to the area.

The project, which represents ten years of work from various community and government leaders, will restore 6,600 feet of the Rangeley Branch rail line while adding 400 feet of new track for a spur line across commercial land as well as 1,500 feet of double-ended siding, which increases capacity by allowing room for storage of freight cars.

Funding for the project was approved for by bonds in 2010 and in 2012 but all voter approved bond funding has yet to be released by the LePage administration. In order for the project to move forward the Maine Department of Transportation stepped in and provided $5 million. Of which $2 million went to acquire the St. Lawrence and Atlantic rail line from Yarmouth Junction to Danville Junction, along with passenger rights to the Auburn-Lewiston Municipal Airport. 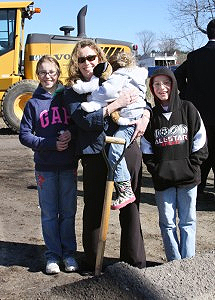 The L/A area can expect significant job growth in Transportation, Distribution and Logistics (TDL) with an estimated projection of 200 jobs over the next 5 years and another 200 jobs in indirect and induced jobs, which are related jobs in the economy of construction and future development, according to Bob Thompson, Executive Director of Androscoggin Valley Council of Governments.

“Analysis of the 2000 to 2009 data showed that growth in jobs and wages in the TDL sector were among the fastest growing in the L/A area and wages exceeded the livable wage estimates for the region,” said Thompson.

Also, national statistics reveal that each rail freight job supports 4.5 jobs in other sectors of the economy.

New businesses are already developing along the mainline rail such as Savage Safe Handling, a bulk product transportation and toll processing company, said Thompson. The restored rail line will provide access to Poland and Auburn allowing for more business growth. Construction is ongoing and is expected to be completed in the fall.

“This is step one of what is going to be a significant effort over the next five to ten years to fill this area up with investment and good jobs,” said Jonathan LaBonte, Mayor of Auburn.

The project is renewing growth at the historic Lewiston and Auburn Railroad Company, which was founded in 1872.