State budget is the same size as the 2001 budget

Governor John E. Baldacci set the record straight about Maine’s spending in his weekly radio address. He said assertions that Maine spending continues to grow recklessly are “a myth.” Maine’s budget for 2011 is the same as it was in 2001, and state spending has decreased every year since 2008.

Baldacci pointed to a Wall Street Journal story highlighting actions– like consolidation, holding back taxes, hiring freezes and spending cuts, that other governors have taken to get through the recession. Baldacci said that if those themes sound familiar, they should because Maine has done them all to set the stage for economic recovery. 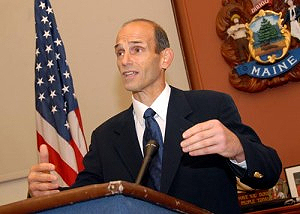 “This week in the Wall Street Journal, four governors from around the country wrote about things they have done to help their states cope with the recession. Two Democrats and two Republicans provided brief outlines of their efforts. The themes were very similar. And very familiar.

“From Pennsylvania, Governor Rendell talked about his efforts to streamline state government and make it more efficient. He talked about consolidation of state agencies, purchasing in bulk, and asking state workers to take increased responsibility for their health care by participating in a wellness program and contributing to the cost of their health insurance. California Governor Arnold Schwarzenegger talked about pension costs and holding the line on taxes. Massachusetts Governor Deval Patrick focused on a smaller state workforce, consolidation of state agencies and smart investments. And from Virginia, Governor McDonnell put his emphasis on smaller government and consolidation, hiring freezes and pension reform, which included requiring state workers to contribute to their pension system. All four governors talked about cutting spending.

“If it sounds like you’ve heard these ideas before, it’s because you have. In Maine, we’ve been doing these things for the last eight years. My administration began to make the push to reduce the size of government before our country was hit by recession.

“We consolidated two Health and Human Services departments into a single agency – reducing the workforce by 300 — brought all of information technology under one roof and brought new discipline to purchasing.

“Overall we’ve reduced the size of state government by about 1,000 positions and imposed a hiring freeze that has helped balance the State budget. We’ve consolidated the administration of school districts and created a combined county-state correction system that is saving taxpayer dollars at the state and the local level. State workers are also doing their share. They contribute to the pension system and pay a portion of the premiums for their health insurance. And they’ve taken reduced pay through shutdown days.

“As the Bangor Daily News wrote this week, there’s a myth that government spending in Maine continues to grow recklessly. It’s not the case.

“And actual state spending has decreased every year since 2008 as we have closed the revenue gap created by the global recession. So at a time that we’ve cut spending, we’ve maintained our commitment to education, innovation and growing the economy.

“We’ve squeezed spending across state government to maximize the resources we can use to protect our core values of a quality education system, a just and justifiable safety net and strong public health and safety.

“And we did it without raising broad-based taxes. In fact, Maine’s overall tax burden has actually declined. It hasn’t gone down by as much as I would like, but it has gone down.

“But what does all this mean?

“It means that our discipline has helped to set the stage for economic recovery.

“Maine finished last year with revenues performing ahead of projections, allowing us to rebuild our reserves to $50 million dollars while also making payments to our retiree pension system and business support programs.

“And through the end of September of this year, the first quarter, revenues are also out performing projections by $26.3 million dollars.

“While there are still too many people without work, Maine’s unemployment level is lower than the national average. And new companies are investing in Maine because they know our State has an unmatched workforce and a high quality of life.

“Whether it’s the purchase of the Domtar mill in Washington County, which helped secure 300 jobs, Kestrel Aircraft, which will bring high-tech jobs to Brunswick or the expansion of companies like Idexx, Maine is an attractive place to live, work and raise your family.

“And our potential for future growth is tremendous.

“We are on the verge of a new energy era, where Maine will be a leader in the production of renewable energy, including wind, solar, biomass and hydropower.

“And Central Maine Power recently broke ground on a $1.4 billion dollar investment in Maine that will create 2,000 construction jobs a year for the next four years and will improve our energy infrastructure for a generation.

“While the there are positive signs for the economy, there’s no question that Maine still faces many difficult decisions. The work to balance spending with revenue will continue. Maine must continue to control tax burdens while investing in economic growth. And we must take care of our children and our most vulnerable citizens without jeopardizing sound fiscal policy. It requires an honest conversation and good-faith effort to make the right choices for Maine. And the ability to adapt to quickly changing circumstances.

“With consecutive bipartisan budgets – even during some of the worst economic times in a generation – Maine has consistently shown that the ideal of public service and servants, compromise and collaboration still exists.

“If we can continue to talk with one another, accept good ideas no matter the source and protect the things that make Maine special, our State will recover from this recession. Our people will have better opportunities. And our economy will be stronger.”