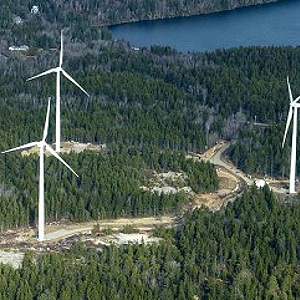 His statement sums it up. The community now has the power in their own hands.

Together they formed the nonprofit Fox Islands Electric Cooperative.

In 2009 the cooperative erected three wind turbines to cut electricity costs and sell the excess electrical energy to the grid. These islanders have found a successful way to make community wind a reliable reality.

In Vinalhaven everybody knows everybody. It is a close-knit community, where residents stick together through thick and thin. Lobster fishing and granite cutting has kept many islanders afloat since the 1800s.

As the island transitioned into an electrical age, powering houses and businesses became a necessity, but one where costs continued to rise. Looking for solutions for their electricity needs has precedent. At one time the island generated power from tidal waters to run a granite-cutting operation. They also had a coal-fueled power plant.

Rising world energy prices and $6.8 million for a new underwater cable in 2005 began driving the island’s electric rates through the roof. But islanders had been researching wind power, looking for energy options that would work for their community. Their wind-test tower, which had been running for three years, showed great potential. And the new cable that had to be put in could be turned into a benefit for the community, as the co-op could sell any excess energy it generated back into the grid, which could trim rates by up to 20 percent.

In 2006 rates on Vinalhaven were nearly thirty-two cents per kilowatt-hour, twice the cost that mainlanders were paying at the same time.

The time had come to invest in a community wind project.

The community put the question to build the wind farm up for a vote. The result was 382 to 5 in favor; history was made, and the island was on the path to becoming energy independent.

With $5 million loaned by Diversified Communications and a low-interest loan from the USDA’s Rural Utilities Services, the balance of the $15 million needed for the project was covered.

The three 1.5-megawatt turbines will generate 4.5 megawatts, more than enough power for the demands of islanders. By all accounts, the project will stabilize their rates and over time drive them down, as excess energy is sold to the grid.

If there are spikes in electrical energy prices, down the road, the island community will be insulated.

Not only will the islanders save on electricity costs, they are helping to reduce their carbon footprint. The project is displacing 150 tons of carbon per week.

Governor John E. Baldacci referred to the project as the statue of liberty off Maine’s coast. “I’m excited about the islanders achieving electrical energy independence,” said the governor in a recent interview.

Most of the islanders are excited to be able to take hold of their energy future.

“What could have been a disruptive summer was instead a constant celebration,” said Baker.

Chad Allen, project manager for Cianbro, the wind project’s general contractor, said, “This is the most enjoyable project I have ever worked on.” With 24 Cianbro personnel living on the Island erecting the windmills, Vinalhaven showed the world what community means. At one rental cabin, the owner even made a lobster dinner for workers.

Community wind projects could be the wave of the future.

Baker is currently looking at three or four other island and coastal communities to see if something similar could be done there. This past summer Monhegan Island residents voted with a 75 percent majority to proceed with plans to erect a small turbine on Lighthouse Hill.

Farmers in Aroostook County are looking to form a co-op of their own and using the islanders’ success as a model, and might begin farming wind. Governor Baldacci will announce legislation in 2010 to streamline the application process for these types of projects.