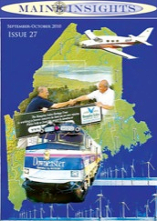 For far too long we’ve been dependent on fossil fuels to heat our homes, to power our industries, and for transportation. Maine uses fossil fuels for over 80 percent of its energy needs. Thousands of dollars from hardworking Mainers go out the door to oil companies every year. But that doesn’t have to be the future. The state has been working hard, since 2002, to become energy independent from fossil fuels.

Maine is tackling clean-energy issues on all fronts with the state’s comprehensive energy plan. Just how much the state has accomplished towards this goal is impressive. The overall plan envisions homes and businesses powered by electrical heat. Some of the energy plan’s core elements were approved by the 124th Legislature — with 39 clean-energy laws.

The state’s energy plan established the goal to weatherize all residences and 50 percent of businesses by 2030 and reduce the state’s consumption of liquid fossil fuels by at least 30 percent by 2030. The plan takes into account regional and national interests.

Working with the New England governors and Northeastern Canadian premiers, agreements have been forged to progress the region’s shared clean-energy goals. In July Governor Baldacci signed an important agreement to share technology and research for tidal power with the premier of Nova Scotia. Previous agreements with the New Brunswick premier have already yielded results in energy transmission corridors and community colleges.

The regional approach to energy transmission is critical to the state’s overall energy independence. Establishing avenues with regional partners to get the electrical energy to market is key.

Clean electricity generated will be transmitted along energy corridors to markets in the Northeast, as well as to homes and businesses across the state.

This year the Legislature passed the energy corridor legislation, which established that state land could be leased to companies to access the grid. The revenues will go to improve energy efficiency, weatherization, and renewable energy projects, including alternative transportation.

The energy-corridor bill lays the needed foundation for an artery of the new national grid to be located in the New England region, versus the Midwest.

The state’s agreement with Central Maine Power with the $1.4 billion Maine Power Reliability Program is also a major part of this process. The MPRP contains plans to build a new 345,000 volt transmission line from Orrington to southern New Hampshire—which amounts to over 2,000 jobs in Maine.

The Energy Efficiency Trust, where residents and businesses can get help to improve their homes or businesses with established weatherization and energy efficiency programs, was created. It’s a one-stop shop, making it easier for people to become energy efficient and save funds.

With the Energy Efficiency Trust, a new program last summer offered a $4,000 rebate to weatherize your home, for any income level. The federal government had a $1,500 refund for weatherization. In total residents could get $5,500 to make home energy improvements. Contractors are still booked. MaineHousing offers multiple programs in the weatherization of homes and apartments.

Over the past two years, MaineHousing has developed the world’s first system to measure the carbon savings created by the weatherization of housing. It’s groundbreaking work.

The state’s weatherization efforts have received praise from the Obama administration and $42 million in Recovery Act funds. Gil Sperling and Caty Zoi of the DOE both said Maine is a model for other states in its energy-efficient programs and policies, which have been enacted over the past seven years.

With over 400,000 homes in need of weatherization in Maine, many homeowners don’t have the access to thousands of dollars to weatherize. The Property Assessed Clean Energy program aims to change that.

PACE allows homeowners to borrow money repayable with property taxes, to weatherize buildings, create efficiencies, or install alternative-energy generators over 10 to 20 years. To start off the program, residents just need to contact the Energy Efficiency Trust directly. The trust is administering the effort until municipalities can.

The Recovery Act allocated $30 million for the PACE program.

Maine obtained significant opportunities for residential weatherization and business and industrial energy efficiency, as a result of the Regional Greenhouse Gas Initiative. RGGI is the first program in the nation that requires all industrial carbon-dioxide emitters in the ten states participating to pay for what they emit in a cap-and-trade system. RGGI earned more than $15.2 million since the first auction in September of 2008. Maine invests the proceeds in weatherization and energy-efficient programs.

The state’s Community Colleges have been training students as wind-turbine technicians and in wind-turbine safety. They also initiated courses in weatherization that covered rural areas with automated transmission instruction, like SKYPE. These efforts laid the groundwork for the federal government to take note.

This year the DOE awarded $880,000 to expand training and certification programs for auditors and installation technicians by creating three weatherization training centers in Maine. The centers will be located at KVCC, Southern Maine Community College, and Washington County Community College.

SMCC will also bring composite technologies to its students at a new center, on the former BNAS base. Composites are used to build wind turbines, as well as boats. This is part of an overall plan to transition the Navy base into a clean-energy hub, with educational programs and businesses building the windmill blades out of composites.

That composite technology is based at the University of Maine, where prototype offshore wind blades are being tested. UMO received over $40 million in Recovery Act grants to conduct the R&D. Energy Secretary Chu recently visited UMO and praised their efforts. When he returned to D.C., he made a request to add $20 million to the budget to develop offshore wind.

Wind energy, on land and offshore, is the state’s big ticket to a growing economy based on clean energy. The state is at the beginning of a green-energy revolution.

In 2008, the Legislature set a goal of producing two gigawatts of wind power by 2020. With 430 Megawatts already permitted, Maine is ahead of the schedule.

Many of the new energy laws have been established to ensure that the development of these alternative energy sources is done in a responsible way—by protecting the resource and the people of Maine. Balanced regulation, as we all have witnessed with the Gulf oil disaster, is critical to protect Maine’s quality of life.

The work going on at the University of Maine, with private-sector partners and support from the federal government, is positioning our state at the forefront of the clean-energy revolution. UMO, under the project’s leadership of Habib Dagher, is planning to build floating offshore wind platforms, using UMO’s cutting-edge composite technology. These floating wind farms will be the first in the world. The first prototype will be built in 2011.

With over 149 nuclear-power-plants worth of wind energy off our coasts, tapping this resource could dramatically empower Maine’s economy, transforming the state by eventually heating our homes with electricity and lowering energy costs. It will also make us an energy exporter.

The plan will mean at least 15,000 people will be employed every year from 2020 to 2030, with the development of commercial, offshore wind farms that will produce 4,000 megawatts of energy. From now until 2020, thousands will be employed yearly, as a prototype five-turbine demonstration site is developed, along with refining the technology.

Ending our dependency on foreign oil is a matter of national security that demands action now.

Maine’s energy, environment and economic landscape will improve for generations to come, and the people of Maine will benefit by being healthier and more economically secure, if we continue grow our clean-energy economy.

At a time when folks are saying, “there is too much government intervention.” Think again, think of what Maine has accomplished in the clean-energy sector, and what that means for the state’s future.

Maine is ahead of the curve, because of the vision of Governor Baldacci, the dedicated work of his staff, the state’s congressional delegation, our Legislature, grass roots organizations, and recognition from the federal government.