Gov. John Baldacci, middle, and Sen. Susan Collins discuss the future of the MMA Railway with a stakeholder. A bond proposal that voters will decide on this June could save jobs connected to the railroad line. Photo by Ramona du Houx

The Montreal, Maine and Atlantic Railway line is, for many businesses and workers, their lifeline. A meeting in Bangor, chaired by Gov. John Baldacci, gave Joseph C. Szabo, administrator of the Federal Railroad Administration an inside view into the probable impact on Maine, if the abandonment of 233 miles of railroad lines occurs.

“The abandonment is unacceptable,” said Gov. Baldacci. “It would cut Aroostook County off from the rest of the state. It would jeopardize thousands of jobs at paper companies across the state that rely on the wood supplied by the County and delivered on this line.”

The negative ripple effect from the loss of the rail line could mean layoffs at subsidiary industries, and possible closures because the alternative of using tucks for transport is unstable due to fuel cost fluctuations. Goods and service costs would rise. At the meeting representatives of 22 northern Maine manufacturers were given an opportunity to voice their concerns to Szabo.

“The lines serve about 5 million acres of forest,” said Denis Berube, director of transportation and planning services at the Northern Maine Development Commission. “The industrial park was built because we thought the line would be there now and into the future. Business will not set up in the County if they don’t have transportation infrastructure for their goods. This is about our future.”

Congressman Michaud discusses ideas to save the railroad with Gov. Baldacci, Sen. Collins and Federal Administrator Jon Szabo. A state bond proposal, to be voted on Monday, could be the first step. Photo by Ramona du Houx

Congressman Mike Michaud who sits on the transportation committee said, “More than 1,700 jobs are at stake in the region in businesses that are dependent on the line for transporting their goods.”

McCain’s potato chips use the line as their major transporter. Aroostook farmers supply the company with potatoes, 100,000 tons of them. The most economical form of transport is by train – switching to trucks could cause layoffs for the potato chip manufacturer.

“We decided to keep our plant open in Houlton last year because we thought we could count on the line,” said a representative from R.H. Foster Energy L.L.C. based in England. “If it shuts down it won’t be cost effective for us to continue in Maine.”

Old Town Fuel and Fiber needs the best ‘fiber content’ wood. They get most of their stock from maple trees grown in the county.

A Maine Department of Transportation commissioned study shows that abandoning the freight lines would put another 36,000 18-wheel trucks on Maine roads.

“Seeing Northern Maine without its railroad, would be like seeing coastal Maine without ships,” said DOT Commissioner Cole. “The line is vital to the state’s economic future.”

DOT Commissioner David Cole listens to shippers concerns. Photo by Ramona du Houx
All the shippers supported a public-private collaboration with the state as a solution. Szabo said at the Governor’s urging that the federal government would be glad to take on the role as a facilitator of a forum to progress the partnership.

Szabo clearly showed support for the railroad to remain open.

“The federal government can’t put the first dollars into this deal, but we can be the final dollars in the deal,” said Szabo. “The bottom line is that there is both the intelligence and the interest in putting the right package together in this room. We are willing to be part of that.”

Examples of possible models in other states, where coalitions were built between public and private stakeholders were sited.

There are federal ‘TIGAR’ grants available but Szabo warned that these grants are highly competitive amongst all states. And time is running out. The MMA railroad owners would like to abandon the line, by summer because of the costs. The TIGAR grant funds would not be allocated until the end of September. The quickest, first part of the solution that would keep workers employed, would be for the Legislature to buy the line for $17 million in a bond proposal that would go before voters this June. The TIGAR grant could follow from that.

“We agreed to work together to come up with the right way to ensure that the best interests of the state of Maine are fulfilled,” said Baldacci. “The jobs bond would be the first step.”

Szabo said that if the state buys the line that would help the TIGAR grant application. 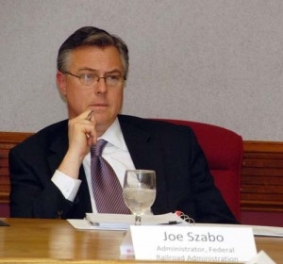 “The administrator made it clear. If there are additional dollars from the state or private companies, the TIGAR grant application would be strengthened,” said Congressman Michaud. “The meeting was very helpful and I’m hopeful the state will step up to the plate with a bond.”

The bond asks voters to approve $7 million to purchase the rail road line. In addition, the agreement includes up to $7 million more in cash that was originally slated for the State’s Budget Stabilization Fund. Shippers, represented at the meeting, who use the MMA rail line have agreed to put in the final $3 million to provide the balance of the $17 million resources necessary for the final purchase of the line.

The Governor issued an Executive Order to create an oversight panel that will monitor and review elements of the take over of the MMA rail line. The panel will assure transparency and guide policy questions during the transition to a new operator, and will include representatives of the Executive and Legislative Branches as well as private sector and nonprofit economic development representatives.

“The loss of rail service in Aroostook could be catastrophic for many Maine companies and communities. It’s clear that the State must act. This Task Force will ensure that abandonment and acquisition process is done openly and in a way that protects the interests of Maine taxpayers,” said Governor Baldacci. “It will also work with the Department of Transportation and other interested parties to develop an operating plan once the railroad is purchased.”

The task force will oversee acquisition of the lines by the state only if voters approve the $57.8 million proposal bond package, which includes additional job creation proposals, on the June ballot.

At the urging of Congressman Mike Michaud Federal Surface Transportation Board officials will hold a field hearing May 10, at the Presque Isle District Court building to discuss the MMA’s handling of the rail lines. Company officials have said that it has been losing $4 million to $5 million a year on the lines because of the recession and housing industry collapse. The lines serve about 5 million acres of forest, 90 percent of which is harvested by the state forest products industry.