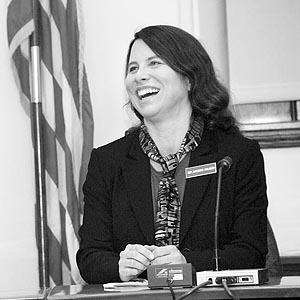 Emerge Maine is part of Emerge America, a national movement to address the underrepresentation of women in office at the local, state, and federal level. There are ladies who graduated from Emerge Maine’s program who are now serving as Representatives in Augusta.

Since Emerge has been established in Maine, how many women have been elected to office across the state?

What holds back women from running?

Studies show that women are less likely to be recruited to run for public office: in short, women are not asked to run as often as men. As you might suspect, women also have a harder time reconciling work and family obligations with the stresses of running for office.

Women are also less likely to “self-select” — they are less likely than men to consider themselves a good candidate and choose on their own to run.

Emerge strives to help women overcome these barriers. First, we recruit women — we ask them to consider running, and then we ask again, and again. We provide training, so women can run with confidence and skill, and we help create a network of other women to support candidates when they do run.

Do you think women in office offer a different perspective on issues, so by having more elected women officials we are better representing the needs and concerns of citizens?

Diversity is always a good thing. Having a variety of perspectives at the table ensures that the needs of each population are being considered. Historically, women have served in public office at very low percentages: 17 percent of Congress, 10 percent of governors, and in most states 30 percent or fewer of representatives in the state legislative bodies are women. And the percentages for women of color are dramatically lower than even those paltry numbers. That’s why Emerge focuses on training only women, with a particular emphasis on recruiting women of color.

When women of all backgrounds are represented, the needs of women and families are much more likely to be adequately addressed.

The U.S. ranks 84th in the world in women’s representation, behind countries like Mexico, China, and Pakistan. Through our training and network, we’re electing more Democratic women, and changing the face of politics here in Maine and across the U.S.

Do you have women in your program set goals to become elected?

Throughout the program, the participants do homework and role-plays as part of the training, many of which require envisioning which office to run for and when. A big part of the program is working with our participants to figure out which race is the best for them, both personally and politically. Strategically, does it make sense to run for a particular office or another? While running for state representative might be the ultimate goal for an alumnae, it might not be the best race to start with, for a variety of reasons. So we train on the many levels of office available for consideration and how to build toward running for the office that is ultimately desired.

We want our alumnae to run for office, and to win when they run. Setting goals and strategically figuring out how to attain them is a very important part of what we do.

Despite a tide of conservative victories, a number of women who graduated from Emerge won their races. Do you attribute this in part to the training?
Yes, as do they. It was a difficult year for Democrats, but several of our alumnae won elections — even in districts that generally went Republican in other races. These eight alumnae used their campaign skills to connect to voters and secure the necessary number of votes, even in the hardest year for Democrats in recent memory.

What do you think is the most valuable lesson Emerge teaches?

Obviously, the campaign skills we teach are extremely important when running for office at any level. Public speaking, door-knocking, developing a campaign plan, fundraising, and many other skills sessions are invaluable for anyone interested in running. However, I think the most valuable piece is the “old girls’ network” that we are building.

Many times women run, and they don’t know any other women who have run, or have served. Emerge Maine is changing that. We’re connecting women electeds and electeds-to-be from all over the state, at every level of government, and helping develop relationships. These relationships often make it easier for women to take that first step of saying, “Yes, I’m going to run” — and knowing when they do they are not alone.

What are the hopes and plans for the program in future?

We plan to recruit more women from across the state — from the far reaches of Aroostook, Oxford, Washington, and York counties. Emerge Maine is going to be part of the Democratic revival, and we’re going to see more alumnae run and win in the next few years. We would like to see more of our alumnae run at the local and county level of office.

Will you run for office?

I may run at some point, but now I see my role as being the director of an organization that recruits, trains, and inspires women to run. I feel I can do more good on a broader scale by bringing dozens of women into the process than I can alone as a candidate.