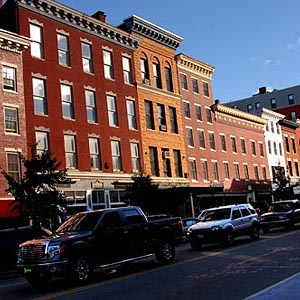 On a warm evening last September, downtown Bangor was bustling with people, map in hand, going from location to location. No, Halloween hadn’t come early, but the anticipation in the eyes of people strolling the streets was reminiscent of kids trick-or-treating. Not knowing what is behind a gallery door can be an exciting quest. For businesses that stayed opened during the official downtown Art Walk, the continual foot traffic increased sales. For restaurants, new customers were enthusiastically welcomed.

“People live in Bangor all their lives, but they never really get a chance to explore it,” said Cara Oleksyk of Metropolitan Soul, a business that takes part in the Art Walk. “On Art Walk night they can come, have a meal, and see what art we have to offer. It’s so comprehensive. There is something here for everyone, from visual to performing dance classes, potters, painters, and fabric artists. The businesses complement the art, and the art complements the businesses. Everyone benefits from this collaborative art night, where we all come together for a big downtown party.”

Though there still aren’t many galleries on the street, studios are waiting to be discovered on the second and third floors of many businesses. Visiting these hidden-away venues during the Art Walk makes a visitor realize the breath of Bangor’s art community. Opening their doors to the public is helping to publicize the city as a cultural destination.

alt“It brings Bangor alive with great energy,” said Tracy Darcy, owner of Metropolitan Soul. “I’ve been here four years, and people are now asking when the next Art Walk will be. They expect it and really look forward to it.”

Page Eastman, a photographic artist with a third-floor studio, said, “It lets people know what I’m doing, and I get great feedback and some sales. My studio only costs me $150 a month.”

The overhead studio spaces are accessible to artists because of the price range from $150 to $250 a month.

“If you compare that to $600 to $1,200 for a space in Portland or Boston, Bangor becomes an opportunity,” said Sally Gilbert, who paints abstract oil paintings and is the Secretary of the Downtown Bangor Arts Collaborative – the group that is responsible for bringing the Artwalks to life. She is an art graduate of the University of Maine, who also studied at the Art Institute of Boston.

“When I came back home to Maine, I saw a need for this, as others have. We’re generating community. People signed up for the event from all over central Maine, Lincoln, and Dexter,” said Gilbert. “It’s an exciting time in Bangor. The older arts groups have formed a coalition. Bangor is heading into an upward growth cycle with spirit and lots of artists behind it. Young people in Bangor want entertainment, places to enjoy each other’s company, and to share interests. Art can be a motivator, a spark.”

Gilbert augments her income as a fiber production artist at One Lupine Fiber Arts Gallery in Bangor and volunteers her time teaching children block printing. She readily admits making a living on art is a challenge, one where more exposure helps.

“The Art Walk lets people know we are here and gives us confidence to continue,” she said. “We do art to express ourselves. I’m a visual artist, because it cuts across language boundaries — it’s another form of communication. It can resonate with people from different cultures.”

When the University of Maine Museum of Art (UMMA) moved downtown, the art scene in Bangor was given a boost. Visitors began to enjoy the museum’s exhibits on a more regular basis. In 2008 a group of artists decided to have an open studio event — that was the Art Walk’s humble beginnings.

All around downtown, doors were opened wide. Art was hanging on the hotel wall, shops, and restaurants. A steady stream of people of all ages took it all in.

Venita Holbrook from Texas said, “It’s the most beautiful state I’ve been in. The people are so welcoming. And the art tonight is impressive.”

“We hope to get more businesses involved, and are working to make the Art Walk eight times a year, instead of four,” said George Kinghorn, the director of UMMA. “The Art Walk certainly fulfills the objective of making downtown Bangor livelier. Many of the pieces are falling into place with the Bangor art scene, which is built not only around the visual arts, but also around all art forms — to give a sense of synergy and quality to downtown.”

Ten years ago, downtown Bangor was very different. The destruction of landmarks, such as the old City Hall and train station, in the late 1960s Urban Renewal Program, ushered in a decline of the city center, which was accelerated by the construction of the Bangor Mall in 1978.

Over the last eight years, downtown Bangor has been undergoing a renaissance. Many old buildings have been remodeled and renovated for residential use. About 500 housing units were created downtown, with grant assistance.

The Children’s Museum, which was assisted by the Governor’s Contingency Fund, established a destination for families and schools downtown. The University of Maine System relocated 120 workers, and the Eastern Maine Development Corporation moved 50 employees downtown. All this created a demand for more cafés and restaurants.

The revival of the waterfront with grants and community support brings people out to walk in the evenings. The Sea Dog Microbrewery and Restaurant on the waterfront is always busy.

The city now hosts concerts, the most famous being the Bangor Folk Festival. The event has put momentum behind the city to implement its master plan for the waterfront, which includes a mile-long walkway along the river, a new auditorium and convention center, and another downtown hotel.

Metropolitan Soul and The Grasshopper Shoppe draw in people by selling unique handcrafted goods and other specialty items that can’t be found at the mall. Across the street is Giacomo’s a Italian deli, with a beer-and-wine selection, serving lunchtime soups, sandwiches and salads. With tables outside, Giacomo creates a Mediterranean café atmosphere — in the heart of downtown.

“All this is about making Bangor a place to want to live, rather than a place that you’re just from. The city has a great entrepreneurial edge to it,” said Gilbert. “In Maine, people make their own way — start their own businesses; Bangor’s art movement taps into that entrepreneurial spirit.”

Some people cannot envisage Bangor becoming an arts destination. Those same skeptics just need to look at cities like Belfast, Rockland, or Portland. All now host monthly art walks. Belfast was transformed from a poultry producing port to a city with a community theater, renovated historic buildings, galleries lining the two main streets, and a new high-end hotel — in just eight years.

Bangor has advantages over Belfast. The third largest city in Maine has the most direct air route between the east coast and Europe, has cruise ships coming into port, and is just off the Interstate. The University of Maine Orono campus, just twelve minutes away, hosts performances with well-known artists and lecturers. A lot of visitors heading Downeast to Acadia National Park pass through Bangor; with the city’s ongoing focus on improving arts and entertainment, more could spend time in the city.

“We now have a comprehensive guide for visitors and citizens to all the cultural options here, funded partially by the Maine Arts Commission. That guide has a Web site with links to all of the cultural organizations — it’s a central focal point for Bangor arts,” said Kinghorn. “I believe that Bangor is becoming a true arts destination.”