Governor John E. Baldacci signed a Curtailment order, September 30, 2010, to reduce State spending by more than $10 million in the current fiscal year. The Curtailment was necessary because Congress passed a smaller state aid package than anticipated, leaving the state to come up with $8.8 million.
“While Maine’s economy is beginning to recovery from the worst recession since the Great Depression, we know that there are many tough choices ahead. The most responsible approach is to constrain spending now,” said Governor Baldacci. “I am exercising my authority to reduce spending immediately, as contained in the bipartisan budget passed last spring, and I am aggressively implementing other administrative strategies to cut spending.”

The Governor signed a curtailment Executive Order to reduce spending by $8.8 million, consistent with authority included in the supplemental budget passed this spring. The Department of Administrative and Financial Services will implement $1.2 million in additional spending freezes.

“Given the context of the budget language, current revenue performance and the continued uncertainty of the economic recovery, the actions I am taking today are responsible and prudent,” said Governor Baldacci. “They will constrain spending and give the next Governor and next Legislature more options as they work to develop a supplemental budget and the next two-year budget.” 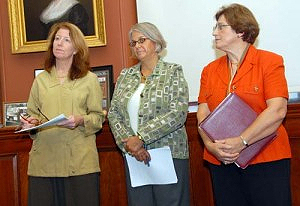 State government is keeping spending flat, even though costs are projected to go up for all services. It’s fiscally responsible as the state climbs out of the recession but it is no easy task. Departments and agencies were asked last July to bring forth plans where services could be cut. The proposed reductions were evaluated based on a number of factors, including the effects on public health and safety, the extent that the impact could be minimized and whether the proposal, insofar as practicable, followed the intent of the Legislature.

The cuts will not result in any layoffs. General Purpose Aid to Education and funding for higher education are not included in the reductions. The governor said he did not include cuts to education because he did not want to disrupt the school year, which has already begun, and local districts are already preparing to cope with the loss of millions of dollars in federal stimulus money for next year.

“The school year has begun and local districts need time to prepare for the loss of Recovery Act dollars, which will impact their budgets next year,” said Baldacci.

The largest reduction of about $5.6 million comes from the Department of Health and Human Services.

“Most of these reductions are not service cuts at this point,” said DHHS, Commissioner Brenda Harvey. “What we have done is tried to absorb in programs funding that we otherwise would have used to expand or increase the program, because as you all know, we have significant demand on services.”

Harvey said the wait lists for services of nearly all the department’s programs have grown because of the recession.

Other cuts include about $1.4 million in the state treasurer’s office, by adjusting the funding for debt service to match current expectations.

Maine finished the last fiscal year on June 30, 2010, with revenues that exceeded projections by $70.4 million. The law required those funds to be deposited into the Budget Stabilization Fund, the Loan Insurance Reserve Fund at the Finance Authority of Maine, General Fund Operating Capital, the State retirement system and retiree health, the Capital Construction and Improvement Reserve Fund and the governor’s contingent account.

In addition, revenues for the first two months of the current fiscal year are above projections by $22.5 million. However, Maine Revenue Service estimates the better-than-expected performance can be partially attributed to the timing of payments.

The curtailment order is temporary and serves to reduce the rate of spending until a supplemental budget can be passed. By law curtailment measures can be reversible.

The Legislature and the Judiciary are not included in the curtailment order. But the leaders of both branches have agreed to make reductions in spending consistent with the scope of the Governor’s orders.