The Maine State Parks Passport program is free at any one of the forty-eight state parks, and promises healthy fun. Organizers hope that it will inspire and encourage more people to visit the state’s diverse parks. The passport contains a descriptive page for each of Maine’s parks with a special place reserved to be stamped. Located at the control station in every park is a special wooden box, which contains the park’s stamp. The ‘secret’ combination to the box is within the passport.

Imagine a son or daughter unlocking the box to uncover the stamp and then stamping the family’s passport. Visiting all Maine’s parks could become a quest. Participants who accumulate stamps can win park-related prizes, such as a water bottle, or free camping. If they visit them all they would earn a free season vehicle pass. 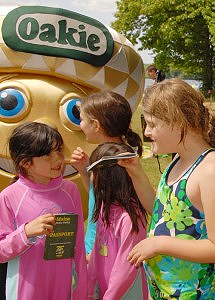 Children have a look at their new Maine State Park Passports. Photo by Ramona du Houx

Governor John Baldacci was on hand to inaugurate the program by officially being the first one to get his passport stamped at Range Parks State Park in Poland.

“It’s a wonderful idea – good for you, good for the economy and good for the state,” said Governor Baldacci. “I often tell people, we don’t appreciate enough the hidden jewels we have in our state. Right in our backyards, we have the Disneyland of natural resources.”

It’s those backyard parks that have built found memories across the state that last a lifetime.

“My grandparents, parents and brothers and sisters would go to, what used to be the Dorothia Dix Park, outside of Bangor,” said the Governor. “We’d have a picnic and then play baseball. There was a brick wall that we pretended was the center field wall at Fenway. If we hit a ball over the wall we were homerun kings. Today, Maine has hit a homerun with this program.”

Commissioner Eliza Townsend of the Maine Department of Conservation (DOC) came up with the idea when she was at a park and some visitors asked her if she could stamp their passport. She soon discovered that they were members of a group that collects stamps in special passports at lighthouses across the nation.

“I thought we could do the same for all forty-eight state parks. On a day like to today you can see how important our parks are to people. It’s important to relax, cool off and spend time with family,” said Townsend as children and adults swam, sunned, kayaked and played baseball in the park. “We have something for everyone, across the state from whitewater rafting to rock climbing. We want more people to get out and enjoy what we have to offer.”
DOC started a Take it Outside program three years ago to encourage families to take their children to parks, and to participate in outside activities more to be come healthier. This program works along side it.

About 75,000 Maine State Parks Passports have been printed for distribution with help from the various sponsors without state funds. There are 13 partners and sponsors, which were acknowledged. 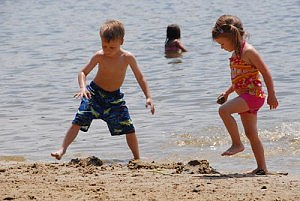 “Oakhurst promotes healthy lifestyles, healthy activities and healthy eating. So it was natural for us to be a part of this,” said spokesperson Danny Kolben of Oakhurst.

Will Harris, director of the Maine Bureau of Parks and Lands, said, “The Passport adds some more fun to a day out in a park, and encourages far more visitation.”

With the Baldacci Administration protected lands in Maine have tripled from six percent to eighteen percent. Last year more than 2.3 million people visited Maine state parks, and attendance is expected to increase this year— the Maine state parks 75th anniversary. 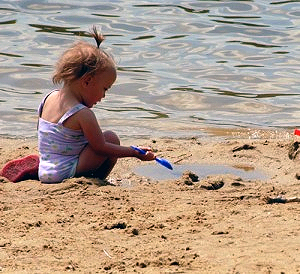 “The more our children have an appreciation for our natural resources, the more they will be good stewards of our environment in the future, and more timeless memories will be made,” said the Governor.
The parks have an economic impact of $100 million annually for the state. 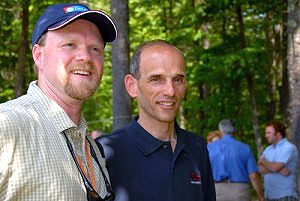 Information about the Maine State Parks Passport is available at: http://www.parksandlands.com