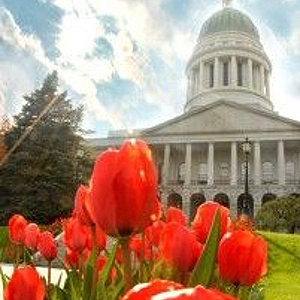 Just imagine a statewide interconnecting trail system. Residents and visitors could navigate the state walking thousands of miles if they wanted, never having to use a vehicle. Bicycle enthusiasts could enjoy Maine’s New England towns and then ride to remote areas. The system would attract visitors from around the world, who appreciate preserving nature, staying healthy, and participating in a place which exemplifies a quality of life.

The idea has a sound foundation. Towns and cities around the state have already started their own trail systems. They have been working on projects for years. Volunteers dedicated to their communities have pitched in countless hours clearing land, soliciting funds, and promoting what they love. Now, the state has recognized that work and wants to help out by connecting the different trails with an interstate system. This was one of the recommendations published in the People, Place and Prosperity report compiled by the governor’s Quality of Place Council. The effort, along with other recommendations, will stimulate growth by investing in Maine’s downtowns and natural places of beauty. The council’s plan relies on grassroots efforts already established. The state will work with local communities to fund these regional economic efforts.

Instead of Augusta making decisions for regions that many lawmakers have never visited, local communities will continue their efforts and be assured of financial help from the State, along with the assistance of State coordination. This new direction, of listening to and acting upon the advice of professional people who are involved in a specific area, is becoming a hallmark of the Baldacci administration. It makes logical, business sense.

The governor’s Council on Competitiveness and the Economy has brought together prominent business leaders to make recommendations on what businesses need from the state to help them be successful in the global economy. His Council on Jobs, Innovation and the Economy advised on how the state needs to invest in identified sectors of growth, called “clusters,” and the bond funding their recommendations passed in November.

State government is working more in partnership with experienced professionals in their specific fields to help the state grow economically, while maintaining and enhancing the state’s quality of life.

Jobs in the global economy no longer are dependent on having to be near cities. Business can be conducted in remote regions with broadband Internet facilities. The state recently announced the recipients of broadband grants which resulted from the governor’s ConnectME program. Efficient broadband makes Maine attractive for new businesses. The international marketplace is welcoming Maine goods. Initial sales from the Maine International Trade Center’s gubernatorial mission were $3 million.

With the transition into an innovative economy, Augusta has shifted how it conducts business and is asking: what can we do to help you succeed in this new economy?

This new economy also demands fundamental change in how government is run. Too many areas duplicate efforts across the state, costing taxpayers millions. With computers, Blackberries, the Internet, better coordination, and streamlining services, expensive time-wasting duplications can end. Utilizing the technologies of the global economy in government helps consolidation efforts, many of which are under way.

From day one, the governor began to streamline state government. 660 jobs went and he combined information technology sectors in state government departments, which saved $11.5 million over a two-year period.

With consolidation unnecessary governmental jobs have to be cut, for that’s where the most taxpayer savings are. Those savings can be reinvested into communities, schools, and needed programs to help the people of Maine directly.

Cutting administrative school positions is working. After listening to communities, the initial plan has been amended by a bill, LD 1932, which recently passed the Education Committee. The bill addresses the problems a minority of school districts had.

Cutting unnecessary positions could result in more jobs being created in Maine as a result of where those savings are reinvested. Consolidation represents changing how government has been run. These changes need to happen for the state’s continued successful transition into the global economy.

The Legislature, our congressmen, the governor, and others are all working to move Maine forward into the new economy in a balanced, sustainable way. Maine is growing in the right direction.

Congressman Allen has introduced a number of initiatives: a $300,000 grant that he requested for the Maine Centers for Women, Work and Community, to undertake a women’s economic development initiative; grant monies for the Gulf of Maine research institute; and the Keep Our Waterfronts Working Act of 2007.

The Legislature will submit their findings from the Joint Select Committee on Prosperity.

With a slowing of the national economy, states are facing budget shortfalls. Because the governor has consistently balanced Maine’s budget with fiscal responsibility, the budget crunch in Maine is not as drastic as in other states. When the budget downturn was announced, Baldacci took swift action with an executive order to balance Maine’s budget.

While the news from the Bush administration often is troublesome and discouraging, as the nation faces more than nine trillion of debt while funding a war that had no reason to be fought, Mainers can take solace in knowing that Maine is progressing and leading the way for a promising future in the new economy.