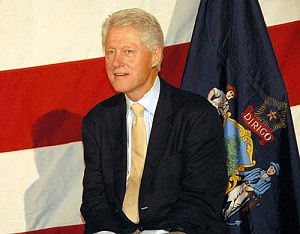 Former President Bill Clinton in Maine on September 26, 2010. photo by Ramona du Houx
“I’ve known leaders from around the world,” said President William Jefferson Clinton. “I think that Libby Mitchell is a truly unique person. She’s a profoundly good person. She’s smart as a whip. She plays well with others. She works with people to get stuff done.”

In the 40 minute speech made by the 42nd president, Clinton made a compelling case to elect Elizabeth Mitchell, who prefers to be known as “Libby”, as Maine’s next Governor and to vote for Democrats in the state legislature and Congress.

Over 1,500 people waited for hours out side of the athletic center on the campus of Southern Maine Community College on September 26th to hear from President Clinton. All the speakers preceding the president—Governor John Baldacci, Congressman Mike Michaud and Congresswoman Chellie Pingree built momentum to the event adding to the anticipation in the air. The excitement was palpable. 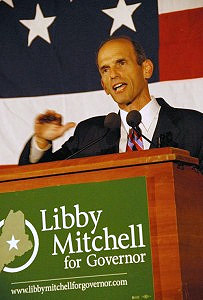 “People need to know that we have come through the toughest recession since the great depression and we’ve done it without borrowing, we’ve maintained our credit rating and we have a lower unemployment rate than the national average,” said Governor Baldacci. “We couldn’t have done it without Libby. She’s got honesty, integrity, foresight, and the right plans to be Maine’s next governor.”

Mitchell is currently Maine’s President of the Senate; she also was the Speaker of the House, which makes her the only women to hold both offices.

“I’ve known Libby since we worked together in the state senate, there is no person more capable of leading Maine,” said Pingree. “I want to wake up November 3rd knowing Maine has elected our first woman Governor.”

The speakers reminded people of how an economy can grow with the right leadership in government.

“I was a member of Congress when Bill Clinton was president, we had surpluses as far as the eye can see,” said Gov. Baldacci. 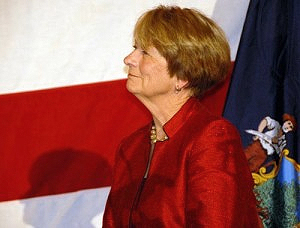 “That’s a hole Republicans began to dig long before the financial crisis,” said President Clinton. “Before the finical crisis medium family incomes were lower than when I was first elected to office. They only added 2.5 million jobs in eight years, that’s less than ten percent of what we accomplished. Poverty and healthcare costs were going through the roof … The last thing we need to do is to return to the failed policies that put us in this hole. Their economic theory that all you have to do is get rid of all the regulations and cut all the taxes on the wealthiest Americans does not work.”

He put forth a detailed analysis of economic conditions, and his vision for the way out. First he said we should keep and build upon the new federal health care act. 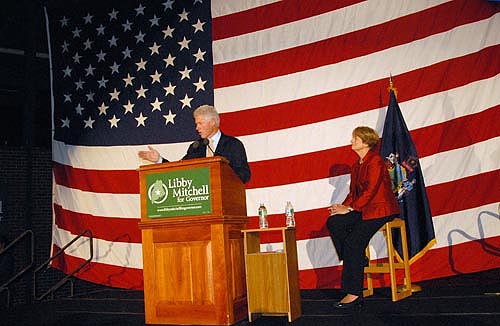 “We spent seventeen point two percent of our incomes on healthcare last year, most other countries spend about ten percent and have better outcomes,” said Clinton. “That’s a trillion dollars going to insurance companies every year. The Republicans want to repeal the law, in large part because when it is fully enacted eighty five cents on every dollar you spend on a healthcare premium will have to go to improving health care.”

He said the Bush years had an economy based on construction, credit cards and financial institutions shifting funds around the world, which jeopardized housing markets and led to the financial crash. He said the way forward is to invest in small businesses, green energy, jobs with educational programs to support the skill sets they will need, getting more people to earn college degrees, and basic infrastructure. Plans he sees the Obama administration moving forward in and plans Libby Mitchell has.

The Maine Republican Party rewrote their platform during the state’s convention this year making extremists views their values and stirring up resentment, anger and hate.

“We can give in to anger,” said Mitchell. “Or we can be positive and look ahead… We will not let our state be destroyed by the tea party. There’s too much at stake.” 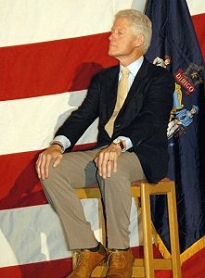 Mentioning the tea party brought comment from the president.

“Of course, they have that wrestling federation lady (McMahon in Connecticut) and they got that witchcraft lady (O’Donnell) in Delaware. So far, they’ve gathered everyone for this tea party but the Mad Hatter,” quipped Clinton to reams of laughter and applause. “It’s important to know their average supporters aren’t all extremists but they are backing the party that is dedicated to destroying government at the state and national level so they can let the biggest corporations go wild making America more unequal, more unfair and taking the American dream away from more people.”

He said that while we are climbing out of the recession, two years to grow jobs and repair the damage that took eight years of Republican’s in power to create, is not enough time. 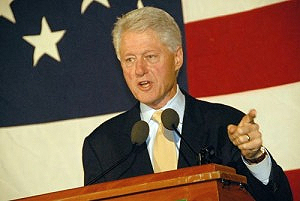 “I was governor for twelve years…I know what it’s like to live in a place when you’re out of work. I understand people are angry and frustrated,” said Clinton. “What the Republicans seem to want, all over America, is to make this election a referendum on your anger or your disappointment, and your apathy. So you’ll stay home— and hopefully you’ll have a lot of amnesia over how we got into this fix in the first place. They had eight years where they were in control and they dug a deep hole. We’ve only been at this for 21 months. The three questions to remember are: where are we? What do we need to do now? And who’s most likely to do it? This election is about choice. 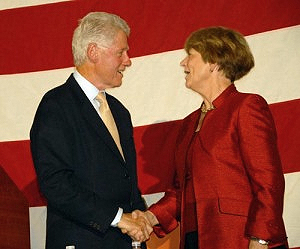 “Libby will take the state where it needs to go. She helped navigate the state through this troubled economy. She’s promoted clean energy and energy efficiency- creating a thousand jobs by taking people out of trailers and putting them into energy efficient homes, she was Chairperson of the educational task force that brought more training and better education programs to the state,” he said. “Look at her opponent: His education program is to teach creationism. This is a sham. It’s not going to create any jobs, it’s not going to train people for jobs, it’s just going to keep people stirred up.”
Clinton also praised Mitchell for supporting Pine Tree Zones and Home Loan programs, both of which, he said, help people directly.

“What you need to do is get people who aren’t here to go and vote for Libby Mitchell. She’s made a lifetime of making very positive change happen,” concluded Clinton. 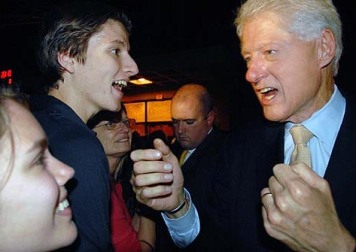 President Clinton talks to Zack Lounsbury and Ashely Oliver a Colby College student telling them that students made a huge difference in the election of President Barack Obama. Photo by Ramona du Houx

“I’m trying to get the younger population out to support Libby. To have the president stop and have a conversation with us was so exciting and encouraging,” said Lounsbury, 17, a senior in high school in Kennebunk and the president of the young democrats.