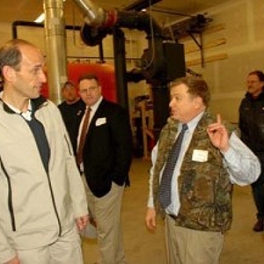 Mt. Abram gave Governor John Baldacci a tour of their new pellet boiler they were able to purchase with state help. Photo by Ramona du Houx

Governor John Baldacci and the Commissioner of the Department of Conservation, (DOC), Patrick McGowen praised Mt. Abram High School for their ingenuity and initiative to install a new wood pellet boiler, during a tour of the facility.

“At Mt. Abram they are actually stimulating economic growth. Their plans to use wood pellets that will be manufactured just eight miles done the road at Strong’s new Geneva Wood Pellet factory helps create jobs and security in the community. The economic ripple effect will be great,” said Gov. Baldacci. “We need to be in control of our own energy supply. Seeing gas hit over $4 a gallon jeopardized businesses across the country, and has cost jobs. We never should have become so dependent on foreign energy sources. This is a shinning example of how we can begin to turn that around.”

According to the DOC replacing 10 percent of the state’s oil consumption with homegrown wood pellets would produce $350 million in economic activity and generate up to 3,700 jobs.

“This wood pellet boiler is the first of its kind to be installed in a Maine school,” said Commissioner McGowen. “It’s a great model for other schools to follow.”

With the fluctuation of oil prices over the last few years whining the school off of oil became a priority for Superintendent Quenten Clark. Previously the school was using corn ethanol but found it caused more problems than it was worth.

“I worked in energy before being involved in the school system,” said Clark of MSAD 58. “For a number of years we’ve been working at becoming more energy efficient. We will save thousands. This system really works.”

Clark said they currently use wood pellets manufactured in Canada and some from Athens, Maine. By the spring they are hoping that will change as the wood pellet factory in Strong will be operational.

“This is a community based energy system. Knowing that the wood pellet factory is just down the road from us made the decision to convert to wood pellets a lot easier,” said Clark. “I’m thankful to the board for their willingness to try something new.”

The governor is leading an inventory of energy uses at public buildings throughout the state, including state and local government offices, schools and hospitals. The inventory will identify buildings where it makes economic sense to convert to wood pellet heat. The state will seek bonds to pay for the upgrades to public buildings as a result of the study.

A Mt. Abram high school teacher, David Langley, said that because of pellet boiler and the new installation of a windmill at the school, students are actively working out energy solutions in class. “We have one student that has decided to pursue a career in alternative energy,” he said. “He and others helped install the wind mill.”

It took Mel Bouboulis, Dan Worcester and Tim Sorrel six-months to install the $192,000 wood pellet boiler while continually meeting the demands of being custodians. The three are known as the school districts all around fix-anything miracle workers.

New models of wood pellet stoves and boilers are thermostatically controlled, and most of them can be lit automatically, like Mt. Abram’s which was manufactured in Australia. Worcester explained how he and his crew easily put the whole boiler system together, mentioning he could build the boiler himself.

“It would be great if we could manufacture these systems here instead of importing them. There’s not much to it really. I could build it,” said Worcester talking to the Governor. The Governor told him about the Maine Technology Institute’s (MTI) seed grant program which can provide up to $12,500 for new product research and development to help him develop a viable product. Other MTI grants that were recently approved in a bond referendum to promote economic growth through innovation could also be applicable.

“You’ll have to fill out some paperwork,” said Gov. Baldacci.

Pellet fuel, with 90 percent efficiency, has been proven to provide the cleanest burn of any solid fuel. A 40-pound bag of New England Wood pellets produces only three ounces of ash.

“Not only are we saving tax payer money we’re helping to save the planet,” said Clark. In winters gone by Mt. Abram used an average of 40,000 gallons of heating oil per season. Now, 300 tons of wood pellets at $180 per ton heat the school. Plus wood is a stable renewable resource in Maine.

At current oil and wood pellet prices, it will take eight years of savings to pay off the system. Last summer, when the price of heating oil soared to $4 a gallon, the whole system would have been paid for in a year an half. With fluctuations in oil prices and the instability oil heating represents Clark feels they made the right decision at the right time.

“You’re a head of the curve,” Gov. Baldacci told Clark. “It really shows what Maine ingenuity can do. It’s a wonderful project.”

The wood source is there. The DOC’s report to the governor stated that an estimated 4.4 million tons of branches, treetops, cull trees and other wood fiber is left in the woods after harvests in Maine annually. About 1.8 million tons of that waste wood is good enough to use in the production of quality wood pellets.

Using that waste wood from Maine forests would allow future wood pellet manufacturers to produce about 900,000 dry tons of pellets.