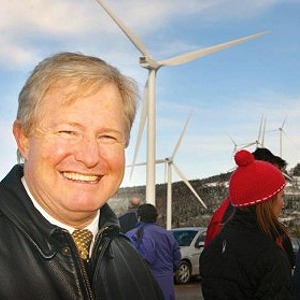 Clean energy — the job-creation issue in campaigns across the state.

Maine has great potential in the green-energy economy with wind, waves, and wood resources in our backyard.

Under the Baldacci administration incentives have jumpstarted green businesses, and the groundwork for energy transmission corridors has been established, enabling an avenue for clean energy to become a major supplier. State government was one of the first to transition its buildings to become energy efficient, using biofuels, energy-efficient lights, and a hybrid fleet of cars, showcasing the energy-saving potential. Now the State has the Energy Efficiency Trust, which helps consumers and businesses find avenues to save funds with energy efficiency.

These are known facts amongst Democratic gubernatorial candidates, who pledge to grow Maine’s clean-energy economy.

“The green-energy revolution will be as great as the Industrial Revolution. President Obama was right when he said it will create five million jobs, fifty thousand of those will here in Maine. It has already begun to happen,” said Patrick McGowan, former Department of Conservation commissioner and current gubernatorial candidate.

McGowan’s Great Maine Forest Initiative (GMFI) builds on Maine’s natural resource strengths, to grow the state’s clean-energy economy. It adds value to Maine’s forests, while ensuring they are sustainable for generations to come.

During his seven-year tenure as DOC commissioner, the amount of land in conservation tripled, from six percent of the state to eighteen percent. Seven years ago, woodlots across America and in Maine were being clearcut at an alarming rate. Maine turned around that cycle and began in earnest to certify wood grown in sustainable forests.

“Maine has 17 million acres of forest, of which 7½ million are now certified,” said McGowan.

“We need to incentivize the landowner to third-party certify the entire Maine landscape,” said McGowan. “We want to certify the whole landscape through incentives, either by giving them a tax break or an offset, so if they certify x amount for so many dollars, that much would come off their tax bill.”

The premise is, if the land stays in the ownership of the paper companies, foresters, private citizens, and loggers who accept incentives to grow sustainable forests eventually the entire state could become a hundred percent green certified wood. During that process McGowan envisions more land set aside in permanent preservation.

Currently, Maine’s paper companies use tree stock that is 50 percent green certified. According to McGowan that would change.

“When we’ve finished, the wood coming off that land would arrive at a mill being wood that is 100 percent green certified. That gives our paper companies the opportunity to offer the worlds’ pulp-and-paper markets 100 percent Maine certified wood,” said McGowan.

In today’s marketplace, consumers want the assurance that they are not contributing to deforestation; creating products made from 100 percent certified wood could open up new markets to Maine’s paper companies.

Pine Tree Zones, which offer state tax incentives, were initially created by Governor John Baldacci to help the wood industry stay afloat. The PTZ status saved numerous mills from closing; since then the mills have begun to diversify their products and processes, becoming more energy efficient. But the threat of overseas competitors still looms.

“We can never compete with China on making paper with their labor prices and energy costs. We can’t compete with Brazil, because they can grow a tree to market in twelve years. In Maine it takes 60 to 70 years to reach full growth,” said McGowan. “However, we know that we can compete in this market with certified paper, pulp, fiber, lumber, chips, pellets, and biofuels. Whatever comes out of our forests that is certified makes us competitive.”

Since the mid 1990s paper companies have been selling off large sections of land, because profits decreased, largely due to overseas competition and energy costs. Developers have purchased this land. Subdivisions have sprung up, clearing large treks of land of trees, adding to the danger of yearly flooding. Plum Creek bought land from a paper company in the heart of Maine’s forests. Their development remains highly controversial. If left unchecked, they would have cut down an old-growth forest, which is a part of Maine’s heritage and is enjoyed by residents and visitors. 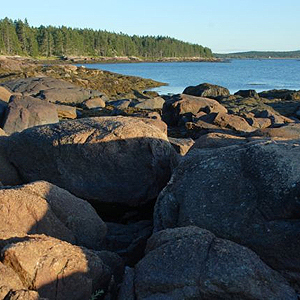 “We need to reconnect the land base to our people, our towns, and jobs, to build our economy. The best days in our economy were when we were more connected to our natural resources. Bangor was the lumber capital of New England. Our mills and towns ran on hydropower generated from our rivers, which also floated logs to the mills,” said McGowan.

Part of his plan is to continue to promote research and development that has led to breakthroughs in energy technologies in Maine, using Maine’s natural resources. He said that these kinds of technologies could make Maine a leader in the energy economy. To highlight that research, McGowan announced his Great Maine Forest Initiative at UMO’s Pulp & Paper Processing Center.

“Mills across the state are beginning to invest in green-energy technologies to save them money on electricity bills and to produce alternative fuels. Old Town Fuel & Fiber is working with scientists at the University of Maine to create biofuel. They are producing bio-jet fuel and employing 200 people. These are the green jobs of the future that the Great Maine Forest Initiative is based on.”

Old Town Fuel & Fiber has specifically designed their facility so the new UMO technologies can be easily replicated and incorporated into other mills.

“At Bigelow labs they are making fuel out of algae. Companies in Maine are in the process of building windmills that will generate several nuclear power plants worth of energy on our hills in Maine,” said McGowan. “All these energy sources will help lower energy bills. The potential here is great. We need to reconnect to what we know how to do best, and that’s working with our natural resources to grow our economy.”

McGowan’s Great Maine Forest Initiative could be viewed as an answer to stop urban sprawl moving north. Maine is unique from other New England states, in part because it remains unspoilt. Sightings of bald eagles are common, the rivers are clean, vistas spectacular, and the forests run through it all. The natural world gives residents a unique quality of life.

With McGowan’s GMFI, he would like to expand the protection of more of Maine’s special places.

“This will save the very special places of Maine, for our people, for visitors, for inspiration. If we certify the entire Maine landscape 100 percent, we will be able to keep our forest as working forests, as well as being able to put very special places into permanent conservation,” said McGowan. “I do not support a national forest or a national park. Paper remains our number-one industry.”

The Pine Tree State might get a boost in recognition with the GMFI.

“Maine is one of a few states that can be branded. The Great Maine Forest will become a brand like Tom’s of Maine, or L.L.Bean,” said McGowan.

The Great Maine Forest Initiative started while McGowan was still DOC commissioner and continues. As commissioner he helped to bring paper companies, the tourist industry, land owners, sportsman, conservationists, and others together to form the coalition that has gained national recognition and could become a model in other states. Since running for governor, McGowan declared his vision on how to best make the project work.

“A lot of different parities will have to continue to be brought together,” said McGowan. “We need a federal partner that will play ball. I met with Secretary of Agriculture Tom Vilsack and the Secretary of Interior Ken Salazar. The Obama administration is looking for some conservation legacies. This is an opportunity for the administration in the Northeast.”

For some it is difficult to understand how transforming Maine’s forests into 100 percent sustainable growth forests will help the economy of southern Maine.

“President Kennedy had a saying, ‘A rising tide lifts all boats,’” said McGowan. “I know the southern Maine economy; my sister has a business there. They need access to capital, small business assistance, new market counseling, and technological improvements. We have to work together as one state.”

McGowan was a presidential appointee to the New England Small Business Administration and a former small-business owner.

“People everywhere in Maine love the outdoors. In Maine you can recharge your soul and body outdoors; I believe it, I’ve lived it. That’s really what makes Maine so special,” he said. “Many people think Teddy Roosevelt got his inspiration for the national parks by coming to Maine. He fished here, hunted here, and recharged his soul here.”

McGowan in his office explaining the benefits of wood pellets as a fuel. Photo by Ramona du Houx

McGowan was the original sponsor of the Land for Maine’s Future Act, which protects areas of exceptional ecological or recreational value. Since its inception, LMF has acquired more than half a million acres, protecting the land largely through easements. Obtaining those easements, which allows public access through private properties, requires a lot of negotiation.

The process is something McGowan is accustomed to.

“One of my proudest achievements was leading the team to complete Governor Baxter’s original vision of Baxter State Park by the addition of Katahdin Lake. The landowner was willing to sell, but they were very attached to cutting down trees. They didn’t really like putting the giant old-growth forest into preservation,” admitted McGowan. “But we all came to the table. Within six months, $14 million dollars was raised, and we came to an agreement.”

“You can’t leave things that are of such importance to the people of the state of Maine undone,” said McGowan. “We’ll talk and work with anybody as long as they are in good faith and the want a common objective. But if they are not, we’ll just go ahead and get it done.”