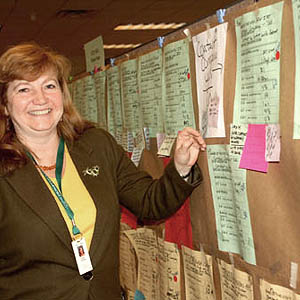 Commissioner Laura Fortman explains how the value stream maps on the walls at the DOL improve services. Photo by Ramona du Houx

Behind the scenes there has been a lot of reorganization happening at the Department of Labor (DOL) since Commissioner Laura Fortman took the helm.

“We are expanding our services while at the same time reducing our costs of bricks and mortar. We need to make sure that our limited dollars are spent on the people and the services that people need rather than spending on infrastructure costs,” said Fortman.

The DOL will be keeping eleven Career Center locations around the state, and no one will loose their job. Services will be more streamlined and convenient for people to access with the Internet.

“There as been some anxiety, out in communities, as people wonder how this is going to play out on the ground. We are reducing physical locations, and on a parallel track we are expanding our ability to provide services using the Internet.”

About a year ago the DOL expanded how people can register for unemployment insurance with the Internet or over the phone.

“About a third of people are using the Internet access to register for unemployment.

“The face-to-face contact is an important service that people expect, and we will continue to provide it,” said the commissioner. “The Internet has opened up a technology we didn’t have before, and people are accessing it.”

“We have lagged far behind other states in being able to access job information online.

Before now, if you wanted services, you would have to drive to a career center between the hours of 8 and 5, Monday to Friday. For many people that was inconvenient. It wasn’t the best way to access information,” said Fortman. “As of September 1st, you will be able to access all the information online from your house or a library with Job Match – Job Search.”

In a best-case scenario, when someone registers online for unemployment, they could immediately find jobs that match their skill sets as the jobs pop up on the screen.

“Anyone can go online and will be able to search for jobs locally, statewide or nationally,” said Fortman.

Services in Career Centers are progressing as well.

“People can schedule a meeting at the local town hall or library if a center is too far away,” said the commissioner. “More of our services will be provided with groups. We will have résumé writing class and writing classes scheduled on a regular basis.”

Maine was chosen as a pilot state for a federal program that works with people who receive unemployment benefits when they meet in groups. The groups are networking and sharing relevant information.

“We found that in these groups people encourage one another and are more enthusiastic about the future,” said Fortman. “When someone goes for a job interview but doesn’t have the right skills, they come back to the group and talk about their experience. Sometimes, someone else in the group may fit the job on offer better, and then they apply.”

Being chosen for a federal pilot program is important because it recognizes the exemplary work being done by Maine’s DOL. Since Fortman became commissioner, the DOL has received a number of grants and has become a model for other states.

“When I fist came to work as commissioner, staff here warned me that there would be federal funds cut back. And there has been a dramatic reduction of federal funds. So from the beginning we realized that we had to change the way we did business in order to keep offering services the people of Maine need,” said Fortman. “The Workforce Investment Act and National Emergency grants were a regular source of funds for us. Our funding streams have been going down. Our goal from the beginning was to plan for cuts from federal government.”

When Governor John Baldacci entered office, he faced a $1.2 billion deficit left by former Governor King. From the beginning he knew he had to streamline state government and begin consolidation efforts.

“The governor asked us, ‘Is this the best way of using funds?’” said Fortman. “We focused on lean government and have found a new way of delivering services that will better serve more people than we are currently able to do, plus it’s a better use of funds.

We have also had significant staff reductions in the department. When I started we had had 533 employees; now we have 464. That was achieved not through any layoffs but through managing positions when people retired and through attrition.”

Doing more with less and maintaining quality is hard, but the DOL have dedicated personnel who believe in their mission. They are making the changes necessary to work efficiently in the 21st-century global economy.

“My commitment to my staff has been to really look at how we do our jobs, make needed changes, and not lay people off,” said the commissioner. “Input from staff on how we do jobs and how we can do them better has been tremendous. There is a real commitment on the part of the staff here to make it happen. These employees deserve a phenomenal credit for coping with significant reductions, staying focused, and providing quality services. They continue to do it all with fewer people.”

The DOL is working to end all duplication of effort, which may exist. The department now serves more people, quicker, while improving the personal touch people need.

“The goal is to streamline processes, so you don’t need as many people to do the same job. We use value stream maps in this process improvement initiative,” said Fortman. “For example, when someone would file a complaint for back wages owed, before we used to have a process that had many long steps. It took three weeks form the time that someone called to report the problem until a person could start investigating. By using our value stream mapping we identified each of the steps and were able to eliminate steps that didn’t make sense. Now we have the process down to one day.”

Part of the initiative is to have meetings where projects and processes are discussed. Often people working outside of the project that is being reviewed ask common sense questions about why something is handled one way instead of another. This leads to discoveries and better ideas implemented.

“It’s pretty exciting watching the staff take ownership for change. It’s a difficult challenge with reduced resources,” said the commissioner. “We’re looking at everything. One of the problems facing in Maine is an aging workforce. We are working with department heads to ensure the knowledge of those valuable workers is not lost when they retire. So we are being innovative, that’s the key.”