April/May 2006 By Ramona du Houx The state is expecting a healthy budget surplus as a result of the fiscal responsibility of the Baldacci administration. With approximately $150 million in anticipated revenue, passing a supplemental budget turned out to be swifter than expected. “I commend leadership and the members of the Appropriations Committee for their diligence and determination in crafting […]

The state is expecting a healthy budget surplus as a result of the fiscal responsibility of the Baldacci administration. With approximately $150 million in anticipated revenue, passing a supplemental budget turned out to be swifter than expected.

“I commend leadership and the members of the Appropriations Committee for their diligence and determination in crafting this final product, which meets the needs of Maine people, continues vital investments to increase economic opportunities for our citizens, and maintains fiscal responsibility,” said Governor Baldacci.

“It’s rare indeed to have a budget pass this swiftly and with such strong bipartisan support,” said the governor. 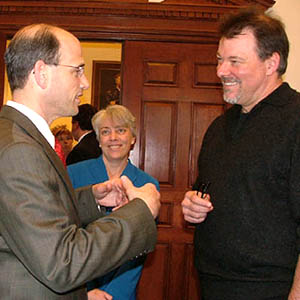 Actor Jonathan Frakes (photo by Ramona du Houx, right) visited the State House and talked to the governor about the new film initiative. Frakes, of Star Trek fame, lives in Maine and said he wrote a script that he would like to see filmed in the state. “Your film initiative will encourage more film makers to come to the state,” he said.

The budget provides $48 million in additional aid to education programs:

This budget continues to bring state support of local school districts to 50 percent under the LD 1 law. With LD 1 state education funding increases, allowing municipalities to decrease local property taxes. The governor’s plans to increase access to higher education were furthered by $200,000 for the College Transitions Program, which pays for adult education classes to assist adults going back to college; and $750,000 for nursing faculty at Maine’s Community Colleges and the University System. The educational segment of the budget also is designed to pay teachers more to cover the time they need to implement Maine’s Learning Results Program and provides $3 million in additional funding for high-performing, small schools. The budget includes $10 million from the General Fund for replacing 32,000 laptop computers for the state’s seventh- and eighth-graders. The student loan deduction was expanded to make higher education more affordable. “It will open the doors even wider for students,” said the governor.

The budget invests in more than $75 million in funding for vital health care services:

The governor recently announced the release of Roadmap to Better Health: Maine’s State Health Plan 2006/2007. Within it there are measures to help the people of Maine become healthier with preventive heath care.

This budget directs $4.6 million to the Fund for a Healthy Maine, which invests in smoking prevention and cessation efforts, prenatal and young children’s care, and dental and health care for disadvantaged people. To encourage people to quit cigarettes, $350,000 is provided in support for the Tobacco Help Line.

This budget provides more than $19 million toward prescription drug support due to the faulty federal Medicare Part D program. This will ensure that seniors and the disabled who received prescription drug benefits under the state’s programs will not lose benefits or have to pay more. The budget also covers the federal “claw back” fee forced upon Maine to pay for Medicare Part D.

The governor recently reiterated his steadfast determination to continue to help our seniors and disabled citizens when the federal government refused a time extension for Medicare Part D’s transition. “We will once again take care of our people in this state and ensure that every senior and disabled person receives the medication they need. While the federal government may not be looking out for the people of Maine, we are,” said Baldacci.

Debt obligations that date back to previous administrations will continue to be met by $16.9 million to help pay down hospital settlements.

The budget makes up for federal government cutbacks:

Nearly 15 percent of the budget went to areas which the federal government hasn’t funded sufficiently, like homeland security or costs imposed on the state like Medicare Part D.

“Unfortunately, Maine is being forced to step up where the federal government is skipping out,” said House Speaker Richardson. “Congressmen Tom Allen and Mike Michaud have been doing what they can to fight the federal budget cuts, and they voted against them, but the Bush budget is doing damage throughout the nation, and we are feeling it severely here in Maine.”

“I’m pleased to say that the budget endorsed the governor’s recommendation of $642,000 for the Maine Drug Enforcement Agency. The funding makes up for federal cuts,” said Commissioner of Public Safety Michael Cantara. The Juvenile Drug Courts and treatment centers now will have their funding restored. Without proper treatment, drug offenders more often than not repeat their offences. “The MDA was on life support; we’re very grateful,” said the commissioner.

Other highlights of the budget package include:

Fifteen million dollars for improvements to Maine’s transportation infrastructure, nearly $1 million to start up a new business court, $1.2 million for the Clean Election Fund, funds to redevelop the Brewer Mill, and funds for the creative economy’s New Century program and the governor’s Maine Film Initiative.

The governor’s supplemental budget went through a round of compromises in the Appropriations Committee, and marathon work sessions, before being passed on to the House of Representatives.

“It is important to me that we were able to maintain our obligation to the health-care safety net,” said Sen. Peggy Rotundo, the Appropriations Committee Senate chairwoman. “It feels good to go back to making these bipartisan budgets.”