During Governor John Baldacci’s State of the State address he said, “We have it within our power to develop new, cutting-edge sources of energy that can help to forever reshape the world. From start to finish, Maine has a role to play. We can develop the technology; use composites from the University of Maine to build the turbines, and lower electricity rates. That means jobs.”

Reshaping the world sounds like an enormous task, but consider this: Maine is developing the world’s first offshore floating wind farms. With the oil spill in the Gulf of Mexico, offshore oil drilling is proving to be a risk not worth taking. Offshore wind is environmentally a better choice, and wind lasts forever. Offshore floating wind farm technology will have global implications.

Those floating turbines could be erected off Maine’s coast. The plan will mean at least 15,000 people employed every year from 2020 to 2030, with commercial wind farms producing 4,000 megawatts of energy. From now until 2020, thousands will be employed yearly, as a prototype five-turbine demonstration site is developed, along with refining the technology. The clean electricity generated will be transmitted along energy corridors to markets in the Northeast, as well as to homes and businesses across the state.

At the same time, plans to weatherize homes and businesses will be underway. Last year the governor’s comprehensive energy package established the goal to weatherize all residences and 50 percent of businesses by 2030 and reduce the state’s consumption of liquid fossil fuels by at least 30 percent by 2030.

To realize all this alternative-energy potential, the legal groundwork had to become law. That required the 124th Legislature’s support. And that support, coming out of the Legislature’s Utilities and Energy Committee, was unanimous.

“Our success is built on innovative leadership and public-private partnerships,” said Governor Baldacci. “We can also take pride in the fact that we in Maine recognize the issue of a clean-energy future is not a partisan one.”

That bipartisan effort has consistently been a mainstay in Maine’s Legislature.

“It was an extraordinary session, with challenging bills focused on Maine’s clean-energy future,” said Rep. Jon Hinck, House chair of the Legislature’s Utilities and Energy Committee. “All 39 bills that we reviewed were worked through thoroughly — we got an unanimous decision on every one.”

The five bills that were ceremonially signed into law by the governor aggressively move these alternative-energy plans forward with the goal of achieving energy independence.

“Maine’s energy, environment and economic landscape will be improved for generations to come, and Maine people will benefit by being healthier and more economically secure, thanks to your support of green-energy development,” said the governor during the ceremonial signing. “For far too long we’ve been dependent on fossil fuels to heat our homes, power our industries, and transport goods and people.”

Maine uses fossil fuels for 80 to 86 percent of its overall energy needs. With thousands of dollars going to oil companies every year from the pockets of individual citizens of Maine, Baldacci said that the new laws could keep those funds in the state, as renewable energy becomes Maine’s energy source and grows the economy.

“We need to make sure that those resources are local and not long distance,” he said.

Within the last year, Maine obtained significant opportunities for residential weatherization and business and industrial energy efficiency, as a result of the Regional Greenhouse Gas Initiative, the twelve-state cap-and-trade system, and money from the Recovery Act. The State also established a goal of 3,000 megawatts of wind energy by 2020 and put all energy-efficiency programs together under one roof, with the Energy Efficiency Trust.

• LD 1786, the energy corridor legislation, is a major step forward in ensuring a reliable energy infrastructure and process for its use. It calls for the designated energy corridors to be used only if likely to reduce electric rates and otherwise benefit the long-term public interest of the state, including not adversely impacting renewable-energy generation in Maine. The revenues from the use of leasing state land for the corridors are also directed to improve energy efficiency and renewable energy, including alternative transportation. The revenues would be transferred to the Efficiency Maine Trust and used on a competitive basis to ensure the steady transition to energy independence and security. These future energy pathways will likely be along the state’s interstate highway system and a corridor from Searsport to Loring.

• LD 1535 will ensure that all Maine ratepayers benefit from smart-grid technology that saves energy, increases reliability, reduces costs and provides consumers with more options. This bill gets Maine ready for a future where we can utilize electric storage and peak-reduction strategies, including plug-in electric and hybrid electric vehicles in a sophisticated and energy-efficient manner.

• LD 1504 defines minimum benefits to ratepayers in wind-turbine host communities. As part of a permit application, expedited wind-energy development projects must demonstrate a community benefits package valued at no less than $4,000 per year per wind turbine, in addition to property tax benefits and jobs created by the project.

• LD 1810, based on the recommendations of the Ocean Energy Task Force, advances development of Maine’s vast renewable ocean-energy resource as quickly as possible in an environmentally responsible way. The bill establishes a state goal of 5 gigawatts of energy generation from facilities located in coastal waters by 2030. A competitive process will be conducted by the Maine Public Utilities Commission for long-term contracting from one or more deepwater, offshore, wind-energy pilot projects up to 25 megawatts or tidal demonstration projects up to 5 megawatts. The bill enacts a clear permitting system for projects in state waters and clarifies leasing of submerged lands for ocean-energy projects. 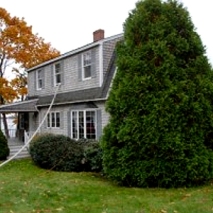 Weatherizing a home in Bangor. LD 1717 allows homeowners to pay for energy-efficiency improvements by rolling the up-front costs into their property-tax payments over 10 to 20 years

With over 400,000 homes in Maine needing weatherization, many homeowners don’t have the access to thousands of dollars to weatherize. The PACE bill could change that. The governor praised it because it allows homeowners to pay for energy-efficiency improvements by rolling the upfront costs of the projects into their property-tax payments over 10 to 20 years.

“It’s like a lien on a property,” said Rep. Patsy Crockett, the bill’s sponsor. “As a property owner saves money though energy savings, they pay back what has been invested. And if they sell their property, the next owner takes up the responsibility to repay in the same way.”

The governor’s energy-corridor bill lays the needed foundation for an artery of the new national grid to be located in the New England region, versus the Midwest.

The legal declaration from the Legislature for long-term commitments in alternative energy, as demonstrated within these bills, is also important to the federal government as they select where the best location will be for a new national electrical grid.

This long-term commitment is key to future potential investors in the alternative-energy sector in Maine.

“The state’s long-term commitments make our proposals for offshore wind farms more attractive to investors,” said Dr. Habib Dagher, director of UMaine’s Advanced Structures and Composites Center, where floating wind-turbine technology is being developed with Norwegian partners. “We have had interest all over the country and all over the world in this. It’s critical for any company looking to invest in Maine to have a long-term commitment. LD 1810 clearly defines Maine’s continued commitment.”

Offshore wind-power technology could support thousands of jobs in the state by 2020.

“These are five critically important pieces of legislation for Maine’s energy-independent future,” said the governor.