Rep.. Mark Bryant – photo by Ramona du Houx Winter 2005-2006 Article by Ramona du Houx Rep. Mark Bryant picks up on little things that normally are taken for granted. He doesn’t let preconceptions get in the way of his decisions as he listens intently to what people have to say about issues. He balances what he hears with the […] 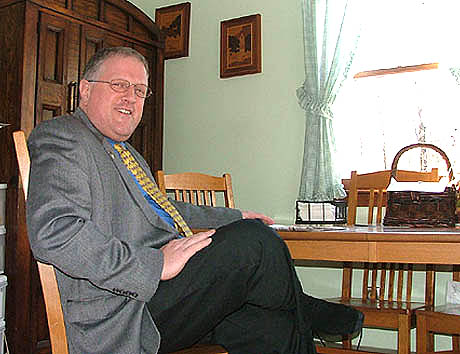 Rep. Mark Bryant picks up on little things that normally are taken for granted. He doesn’t let preconceptions get in the way of his decisions as he listens intently to what people have to say about issues. He balances what he hears with the research he has done and comes to conclusions based upon his Democratic values.

When he comes up to bat, he brings in the runs needed because he consistently makes the right decisions that help the people of Maine.

Before being elected to the House, Bryant was very active in his community. When his children were involved in sports, he coached the Windham Little League and youth soccer. He attended town and school-board meetings and chaired a committee whose report on fire and rescue services was implemented by the town. For over 19 years he worked for Sappi Fine Paper and was active in the union.

So how did this happily married father with three boys find himself in the halls of the Capitol, representing Windham?

“The Democratic candidate for this area that was running was too conservative. I honestly thought that I could do a better job,” said Bryant. “I couldn’t sit back and watch someone who didn’t represent the values of this community become my representative in Augusta.” Bryant’s primary opponent in ’04 has since enrolled in the Republican Party.

When Bryant, who serves on the Judiciary and Ethics committees, sees a problem arise in Augusta, he doesn’t pretend that it doesn’t exist. Instead he meets the challenge head on in an attempt to solve the issue.

Having one insurance agent for Dirigo Health bothered Bryant. He foresaw problems and decided to take action.

“Dirigo belongs to the people of Maine, not a big insurance company,” he said. “We need to have other options in place to ensure Dirigo can continue to succeed.”

Bryant submitted a bill that proposes allowing the Dirigo agency to explore and develop alternatives for the administration of the state’s year-old subsidized health insurance product, DirigoChoice. According to Dirigo Health Agency board Chairman Dr. Robert McAfee, there are other carriers interested in bidding for the DirigoChoice contract.

“You can’t put all your eggs in one basket. Opening up the market for other providers or agents is only logical.” Bryant’s bill would grant greater autonomy and flexibility to the Dirigo Health Agency, taking some control away from the Legislature. “I had a hard time with that provision, but I am sure that new language will be submitted to address that.

“The bigger picture of providing health insurance to the people of Maine will win out. Too much control in the Legislature makes the program vulnerable to party politics; there needs to be a balance.”

Bryant’s bill, cosponsored by his brother in the Senate, is a bold and needed measure. There will be those who are not willing to give up the legislative oversight of Dirigo’s operations. Bryant says he was sent to Augusta “to stand up for the people of Maine.”

Since DirigoChoice’s insurance provider, Anthem, is contesting the $43.7 million savings confirmed by the superintendent of insurance, how Dirigo will be funded in the future is currently being debated.

“While we have been pleased to have Anthem as our partner and were delighted that they responded to our initial requests for proposals, we want to be sure that when that contract expires next December 31st, that we assure the Legislature, DirigoChoice enrollees, and all the people of Maine that every available option will be considered to grow the program for the future,” McAfee said during testimony in support of Bryant’s legislation.

Bryant sees his bill as a way to ensure that there are no interruptions to the health-care coverage of the 14,000 people now enrolled in DirigoChoice.

One possibility is the creation of a new, state run insurance company which the governor alluded to in his State of the State address.

Bryant has had success in the past with his legislation that made it illegal to sell or buy over the internet a product to inhale alcohol. Within twenty minutes of inhaling the alcohol, a person becomes intoxicated. Alcohol without liquid, AWOL is legal in some other states and can lead to teenage fatalities.

On another occasion, Bryant heard about a member of the National Guard who was told upon his arrival that he had to work. Tired, and still in transition from returning from a military duty, the National Guard member fell asleep at the wheel and died on his way home from work. Bryant took action and submitted legislation to allow returning Guard members a period of up to 72 hours before they are required to return to work.

Looking out for people — being their voice that needs to be heard — is a talent that makes Rep. Mark Bryant a true leader in the House.

Rep. Nancy Smith co-owns a grass-based, diversified farm in Monmouth, Snafu Acres Dairy Farm, with her husband. While Ivan milks the cows, Nancy feeds the livestock and takes care of a variety of other farm duties that always keep her on the go. Inside the house the phone rings continuously with calls on farm business or about constituent issues. Nancy is constantly taking off one hat and replacing it with the other. But in a unique way, it all comes together. Smith manages to balance it all.

Without issues on the farm, from raising cows, chickens, pigs, turkeys, and llamas, she wouldn’t have the experience to really talk about what small businesses need, what agriculture needs, or how we can move the state forward with the creative economy.

Smith is always eager to highlight the need for local produce to be promoted. When people buy from local farmers, they support a long-standing tradition and help control suburban sprawl.

“It’s healthier to eat local foods, and to buy from local farmers helps Maine’s overall economy,” said Smith. “One key to the future of the family farm is to diversify.” Smith married a fifth-generation Monmouth farmer eleven years ago. Since that time she has been active on the farm and in agricultural issues.

She became interested in politics while serving as a director for Maine Farm Bureau. Smith soon realized that a lot of her concerns were shared all across the state. The next step was Augusta.

She serves as House chair of the Legislative Committee on Business, Research, and Economic Development. She thought she was prepared for most anything. But she never imagined as a state representative she would one day find herself on a plane bound for China. “Although I’ve traveled across this country, the only international travel I have done before was to Canada, and that is only 500 miles from home,” said Smith with a broad smile, recalling her adventure. “We spent three days in Beijing and then three days in Inner Mongolia.”

Smith is bright, articulate, inquisitive, and ready to take on any challenge. Meeting new people she sees as a way to open doors to more opportunities for the people of Maine. That’s exactly what happened during her trip to China.

“We met incredible people who just want to improve their livelihoods. They want to be successful business owners,” said Smith. “They share the same Democratic principles of raising a family, making a living and providing for everyone’s needs.”

What surprised her were their agricultural practices. “The Chinese were primarily interested in improving the genetics of their dairy cows, but we found in visiting their farms that there were many improvements to be made in herd management and feeding systems.”

As a result of the trade mission, the Eastern Trade Council is organizing a follow-up mission, with interested parties from Inner Mongolia traveling to Maine and other Northeastern states later this year.

“Markets in China are opening up fast,” said Smith. “It’s important for us to be there at the beginning. Our goal is to establish relationships with the farmers we met, and create long-term opportunities for Maine agriculture. It helps our economy to build these cultural connections for businesses in Maine.”

Maine International Trade Center opened a China desk in Lewiston to assist Maine businesses interested in pursuing opportunities with Chinese enterprises, after the ambassador to China visited the governor last spring with an invitation to visit.

Smith’s astute business sense has inspired her to submit bills related to strengthening Maine’s small businesses. As a result of one, a new service to streamline business licensing by providing real-time Internet chatting with experts in the DECD’s Business Answers program is now available online.

The live chat promises to aid businesses as they seek to navigate licensing requirements and learn more about available state resources.

“In order to maintain and create jobs, we must invest in our people, innovation, and small businesses,” said Smith. “Giving businesses the tools they need to prosper in Maine’s evolving economy is our top priority, and this program does just that.”