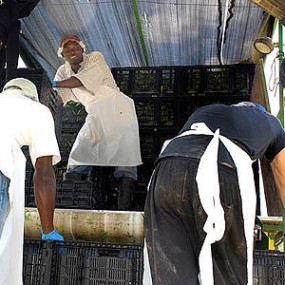 More people across Maine are opting for locally grown produce: it’s cheaper, leaves less of a carbon foot print by not having to travel large distances, and because it is grown literally by a neighbor, people trust that it is fresh and grown with integrity. Sales of locally grown foods in the United States are expected to rise from about $4 billion in 2002 to $7 billion by 2011.

Producing quality, locally, organically grown produce is the mission of the first large-scale organic farm in New England, located along the shores of Merrymeeting Bay in Bowdoinham, Maine.

“Five ounces of our greens cost $1 less than the same amount of greens from California, largely due to lower transportation costs. Our greens are fresher, for they are on trucks for considerably less time,” said Ben Dobson spokesman of Locally Known. “And they are healthier, being organically grown.”

Most salad greens travel more than 3,000 miles from California’s Salinas Valley to destinations along the New England coast. By comparison, Locally Known’s produce only has a journey of just 144 miles from Maine to Boston.

“With fuel prices increasing and petroleum-based fertilizers used in conventional farming increasing, local organic produce has become a real competitive option for supermarket chains,” said Brook DeLorme, who, along with her brother Noah, are equity partners in Locally Known. “We’re looking to expand. By this time next year, we will be twice as big.”

“This is absolutely huge. What Locally Known is attempting has never really been done before on the East Coast to this level,” said Bill McGowan in an interview with the Boston Globe. McGowan is Whole Foods’ produce coordinator for the North Atlantic region. Whole Foods is now supplied by Locally Known.

Dobson started the company with David Goldstein and Shimon Horowitz. The three grew up together and remained friends, pursuing different goals until an opportunity arose to purchase the farmland in Bowdoinham. Reunited, and each possessing different skills that help Locally Known, they began operations in June, supplying arugula, baby kale, and spinach to Whole Foods, Trader Joe’s, and Hannaford supermarkets in the Northeastern United States. The company expects to harvest about 60,000 pounds of greens each week.

“Ben and I worked on his father’s farm before we jumped in the deep end on our own.

We know the business of greens and how to take care of crops, we did hands-on research working as farmers,” said David Goldstein, who was a carpenter as well as a farmer. “As organic farmers, we take pride in producing quality food that is safe.”

Costly food safety requirements, due to restrictions that became more stringent following the E. coli outbreak in spinach in 2006, have made it hard for organic farmers who dream of marketing their produce on a commercial scale. That challenge didn’t daunt the young entrepreneurs of Locally Known. Armed with their business plan and some equity, these five entrepreneurs connected with the Finance Authority of Maine and then Maine’s agriculture department, where they succeed in obtaining a loan for $250,000. The result enabled them to build a processing plant that washes, dries, and packages the greens to meet industry standards.

“Ben and his crew have worked hard to meet food safety standards at every step of the operation — from the time the seeds are planted until the greens are washed, chilled and packed,” said Maine’s Agriculture Commissioner Seth Bradstreet. “The public wants assurances. And in Maine we can provide it with locally grown food from farmers you know.”

In the fields, a special Italian-made machine harvests the crops. It is equipped with band saws on wheels that are calibrated to different heights, depending upon the greens being cut. The state-of-the-art harvester with a crew of three can do the same amount of work that would take 50 people picking lettuce by hand.

Turning over the crops on a rotation basis is key to the success of the farm. This season fields with greens growing have been turned over three times.

“We’re hoping in the future to get four crop rotations. We’ve got the best soil in Maine and can irrigate from the river,” said Dobson, who grew up working on his father’s farm in the Berkshires. “We are seeing a high profitability per acre.”

Locally Known’s 170-acre operation is the biggest organic operation in the Northeast, yet it is tiny compared to lettuce farms in California, some of which are more than 2,000 acres. But Dobson and his partners see that as an advantage.

“We work with the community, employing local workers, and we hope to empower local farmers with a consortium that we are working on,” said Dobson. “We are just the right size in Maine to be locally organically grown and locally known.”

They also are “artisan” producers, which means they take extra special care of their crops, working daily on solutions to problems, analyzing how well crops are growing, and devising better crop rotation — all with the focus on producing a quality product.

“It’s the attention to details growing the product and packaging that really makes this a quality operation at every level,” said Simon Horowitz, a partner of Locally Known. “By adding value to what we produce, it works. We grow quality, organic greens and package them for sale. By doing our own packaging, we add value to the product and can make a profit. But honestly, none of us are in this to make money, we just want to make a decent living, knowing that we are helping our planet by reducing our carbon footprint, supplying organic greens to the Eastern Seaboard.”

Horowitz gave up a lucrative profession to become an organic farmer. The Maine Maritime graduate had been traveling around the world as the chief officer on oil vessels. Now he is in charge of the processing facility and runs the operation with the efficiency of a ship’s captain. And the crew visibly likes and respects him. He regularly works amongst them, packaging greens into plastic clamshell cartons.

“When Ben and David contacted me I jumped at the opportunity,” said Horowitz. “It was a natural fit, because as chief officer on ships I had to deal with regulations, managing people and quality control everyday. Now I get to do that being part of the solution instead of contributing to the environmental problems the world faces.”

The company’s commitment to the environment helps motivate the entrepreneurs.

“Honestly, it gives us the get-up-and-go we need to work 17 hours a day,” said Goldstein. Their website reads: At Locally Known it is important to us that our food is healthy and that our contribution to the world helps lay the framework for an economically and environmentally viable future.

Locally Known is implementing a plan to be carbon neutral by 2012, by converting to solar energy with a biodiesel-powered generator backup. All transport vehicles will be run on biodiesel, and the company is sponsoring a tree-planting program in Haiti.

The partners hope to support and establish regional organic farms by creating a market and regional distribution network. And the company is developing a training and apprenticeship program for new organic farmers, farmers looking to transition to organic practices, and existing organic growers who would like to supply Locally Known.

In time the entrepreneurs hope to develop partnerships with local organic farms up and down the Eastern Seaboard and package their produce under the Locally Known label.

Locally Known also has a carbon control plan that its suppliers must develop within the first three months of their growing contract.

“The more regional the product, the better it is for communities, the environment and the local economy,” said Goldstein. “Being able to create a local-region source for our area feels great. It’s bigger than a 9 to 5 job working for someone else. I really wish more people would start organic farms; it’s the way of the future. There is something about working with the soil that nurtures the soul.”

All the partners believe in promoting locally grown organic produce, wherever that may be, because it’s healthier for the environment and for consumers.

“It’s so encouraging to see a new generation enthused about farming taking the next step in agriculture. It’s exciting to hear about Locally Grown’s plans of creating an umbrella for farmers, so they can have a place for their value-added processing to be done with quality control,” said Governor John Baldacci during a visit to the farm. “I’m looking forward to working with Ben and his partners to move their plans forward. With the support from Maine’s Department of Agriculture, new technologies and techniques, Locally Known is helping to pioneer new opportunities for Maine farmers.”

Baldacci was a member of the Agricultural Committee when he was a congressman and fought for programs that would benefit Maine. He continues to promote locally grown foods and farmers markets.

Maine has more than 7,100 farms, the majority of which are small, family-owned operations. The industry employs 65,000 workers and has direct sales of nearly $600 million a year.

“What we are doing for the environment is huge. We have begun supplying our region with organic greens,” said Horowitz. “People have lost their connection with food. They don’t usually think about where it was grown and how. Hopefully what we are doing will bring back that connection.”

“Mainers have always known and appreciated the value of local farmers. Ben Dobson and the other investors in Locally Known represent the true Maine entrepreneurial spirit. They are all young, in their 20s. They are the next generation of farmers — it’s great. They’ve identified an opportunity to supply the increasing demand for organic foods grown regionally,” said Baldacci. “It’s smart for the environment; it’s locally grown, fresh with great nutritional value, and helps Maine’s economy.”

According to Dobson, “It’s the right opportunity at the right time.”