The revenue downturn is a serious challenge that we must address now. – Governor John. E. Baldacci 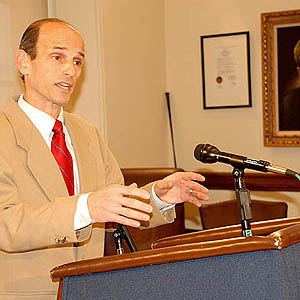 Maine Governor Baldacci announcing his curtailment in the Cabinate Room at the Capitol. Photo by Ramona du Houx

Thirteen states face a combined budget shortfall of at least $23 billion for fiscal 2009, according to a recent report by the D.C.-based Center on Budget and Policy Priorities (CBPP). Maine’s deficit, 1.8 percent of the General Fund, is the lowest in the group. Rhode Island and California are facing 10 percent revenue shortfalls with the remaining states averaging around 6 percent. Eleven additional states are projecting deficit problems over the next two years.

According to CBPP, some of the fiscal problems facing states are due to economic conditions outside states’ control. For example, state sales tax revenue has declined because the bursting of the housing bubble has reduced sales of furniture, appliances, construction materials, etc. In many states, economic problems are magnified by past state decisions about taxes, including multi-year tax cuts, without accurately assessing their affordability or the failure to address structural weaknesses in their budgets.

“I think it’s important to note that Maine has avoided those kinds of structural weaknesses,” stated Christopher St. John, executive director of the Maine Center for Economic Policy (MECEP). “Our deficit is primarily a result of a slowing national economy and not due to poor fiscal planning.”

Governor John Baldacci issued an executive order directing State agencies to reduce the rate of spending in the current fiscal year by $38 million to address the problem.

“The revenue downturn is a serious challenge that we must begin to address now. People and businesses all around Maine are hurting. High heating oil prices and a struggling housing market are forcing people to make tough decisions. Families are struggling,” said Baldacci. “They have to tighten their belts, and government must do the same. We can’t spend money that we don’t have. Until the supplemental budget is passed, the curtailment will ensure our spending doesn’t exceed our revenues.”

The day after the governor’s State of the State address the Baldacci administration unveiled the supplemental budget and legislation that works in tandem for jail consolidation.

The supplemental budget mirrors many of the cuts implemented by the curtailment, including consolidation efforts in Health and Human Services, natural resources, and others. Joint purchasing for prescription drugs for pubic employers and joint purchasing for schools are also major initiatives within the proposal.

Maine invests more in Health and Human Services than most other states; as the Brookings report stated, this has taken funds away from other functions that could grow the economy.

“I understand that these decisions touch real lives,” said the governor. “That is why I have vowed not to pull the safety net out from under our most vulnerable citizens. At the same time, we need to address this revenue downturn.”

The supplemental budget closes the $95 million revenue shortfall and balances the budget for the remainder of the biennium.

“It does not draw down on the Budget Stabilization Fund, allowing us to use that, if necessary, in order to address any other issues that might pop up, given the outlook for recession seems to be increasing daily,” said Becky Wyke, commissioner of the Department of Administrative and Financial Services.

The corrections unification legislation proposal eliminates the need for new construction of four facilities and combines administrative services. Under the plan, the State will assume operation of jail functions and establish regional facilities organized by the eight existing prosecutorial districts. In the first year the expected savings would be up to $7 million.

“Through controlling spending and reducing administration, we will balance this budget and make the critical investments needed to grow our economy now and into the future,” said the governor.