Neely Connor, the daughter of Rep. Gary Connor, helps Governor John Baldacci sign one of 18 new healthcare bills passed during the last session. Photo by Ramona du Houx By Ramona du Houx When the Clinton administration highlighted the need for healthcare reform in America, a congressman from Maine listened carefully. Talking to Mainers, he knew it was a major […] 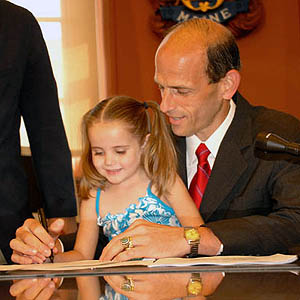 When the Clinton administration highlighted the need for healthcare reform in America, a congressman from Maine listened carefully. Talking to Mainers, he knew it was a major concern to them. When he became governor he changed Maine’s healthcare system and created Dirigo Health.

Four and a half years later the nation has finally woken up to the dire need for healthcare reform.

Maine is further along the road because Dirigo Health is in place. Governor Baldacci readily admits that it is a work in progress. It is progress. Healthcare delivery anywhere in America is a complicated issue. Bringing the different interests and concerned parties together to discuss the issue is a breakthrough in itself. That was par for the course with the Blue Ribbon Commission set up by Baldacci, who is known for his gift of bringing everyone to the table. The commission published a set of recommendations that they concluded would sustain Dirigo Health and its insurance arm — DirigoChoice.

Dirigo Health is the commitment of state government to improve the health of all its citizens, “to make Maine the healthiest state.” DirigoChoice worked with Anthem Blue Cross Blue Shield to cover people. These are of course simplified explanations to what is a complex system. The point is — Dirigo Health is working, receiving praise from other states.

“While other states are working against entrenched interests to get their plans off the ground, Maine is actually insuring about 20,000 people — including small businesses, self-employed individuals — through Dirigo,” said Governor Baldacci. “And while our plan is controversial here at home, it has received accolades around the country from other states and impartial observers, like the John F. Kennedy School of Government, as an innovation leader.”

The problem, in Maine, has been in the perception propagated by an organization set up to discredit Dirigo Health from Dirigo’s birth — The Maine Heritage Policy Center, a think tank run by Republicans. Because of this nonprofit’s biased reports, Dirigo has been on the defensive from the start. The Maine Heritage Policy Center accuses Dirigo of not meeting expectations; at the same time it has been their misleading statistics that have tarnished the program in people’s minds, making people doubt and keeping some from enrolling. Health care represents bottom-line profits for big companies.

Despite the obstacles, Maine is in the process of creating a healthcare system that will eventually cover all Mainers. That is a major breakthrough for America.

Health care in all civilized western nations, except the United States, represents the willingness of a society to take care of everyone, recognizing we all live together and need to help one another. Being a profit-oriented system, puts people’s lives at risk. American’s are crying out for change.

That change is taking place in Maine step by step.

During the last legislative session, 18 bills on health care were enacted.

“These bills together go a long way to accomplishing our most important job — to protect the health and welfare of the people of Maine,” said Baldacci.

The wide array of legislation increases information about prescription drugs and their costs, while limiting the ability of pharmaceutical companies to influence a doctor’s decision about which prescription to use. One bill deals with hearing aids for the young.

“It’s a major concern. If children can’t hear, then they can’t learn. As a teacher I’m very aware of that,” said Sen. Nancy Sullivan, who said the cost per hearing aid for just one ear is about $3,000, and children need them changed every year.

“Until this new law, if you had a mammogram that wasn’t clearly photographed the first time around, you would have to return to have another x-ray taken, but you would have to pay for the second x-ray,” said Rep. Anne Haskell about her bill that expands coverage for breast cancer screenings. “Too often women wouldn’t bother.”

A new law, sponsored by Rep. Chris Barstow, extends health coverage, on a parent’s Mainecare plan, until the age of 25.

One law calls for reviews to expand access to dental care. Another gives assistance to Mainers with debilitating diseases such as eating disorders and mental health issues, and another improves practices that promote HIV testing to help limit the spread of the disease.

“I am happy to see An Act Concerning Postpartum Mental Health Education signed into law,” said Rep. Garry Connor who worked on the committee and brought his daughters to the signing. “During the testimony at the public hearing, I was shocked to learn how widespread postpartum depression is; it affects one in eight women following the birth of a baby and is one of the most common consequences of childbirth. This legislation is an important first step to assure that the disease is diagnosed and promptly treated, so that mothers of the future, girls like my two daughters, do not needlessly suffer.”

LD 431 enables DirigoChoice to be self-administered, thereby taking the profit motive out of providing health insurance and cutting costs to enrollees dramatically.

A bill following the recommendations made by the Governor’s Blue Ribbon Commission on Dirigo Health calls for the investigation of healthcare cost drivers. This legislation specifically expands the duties of the Advisory Council on Health Systems Development to identifying specific potential reductions in total healthcare spending without shifting costs onto consumers.

All the new laws move Maine forward in its efforts to become “the healthiest state in the nation.”

“These 18 bills provide further evidence that Maine is the leader in healthcare reform and in efforts to expand access to quality affordable health care,” said Baldacci. “I’m proud of the efforts of the Legislature to take on these issues successfully.”

While Sicko debuted in movie theaters across the nation, shocking people with the realities of the inadequacy of America’s healthcare system, people in Maine who understood what Maine is accomplishing with the objectives of Dirigo Health took solace in the knowledge that Maine’s healthcare system is moving forward. Hardworking Mainers, who were not previously covered, because they couldn’t afford health insurance, who have enrolled in DirigoChoice, have had their cancer treated, and operations that were needed, amongst other important measures.

The program faces its greatest challenge in the upcoming legislative session; it needs to develop a mechanism to become financially sustainable. Call your representative (287-1430), senator (287-1540), or the governor (287-3531) and let them know Dirigo has your support.