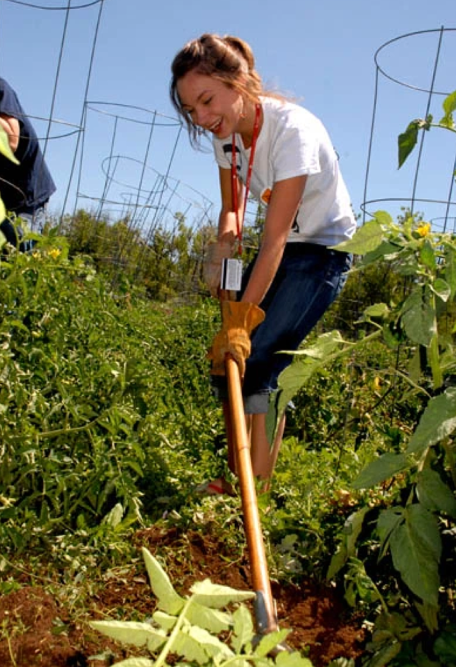 College Democrats of America works for Democrats Work in a community organic garden in CC, during the DNC convention. Photo Ramona du Houx

“Unions started from the principles of community. They are based upon the fact that if we all work together, we are stronger. Community service makes our nation stronger,” said presidential nominee Barack Obama, during a forum on community service held in New York City.

On that third day of the DNC convention, delegates and volunteers fanned out across the Denver area to help in various community events.

“Packing care boxes for our troops, with Michelle Obama, was the best part of the convention,” said Eamon Hart from Bowdoin College. “Being able to help out in the community makes the words from the speeches have more meaning. Everyone can be involved in making change happen.”

“Community service events like this bring diverse people together for good causes; that’s what Democrats do,” said Caitlin Callahan of Bowdoin College, “Writing a letter to someone overseas, serving and packing a box of needed supplies for him, really makes me feel I’ve accomplished something tangible, something that I hope will make a difference.” 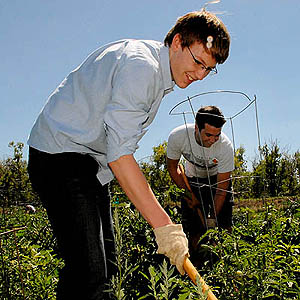 Alec, co-president of the College Democrats of America works for Democrats Work in a community organic garden in CC, during the DNC convention. Photo R. du Houx

“We relied on local volunteers to help escort delegates from their hotels to their projects, either on foot, on the light rail, or by school bus. There were probably over 1,000 volunteers out working that Wednesday morning, doing everything from planting trees, painting out graffiti, packing care boxes for troops, reading to students, serving lunch to Denver’s homeless, sorting food, to playing bingo with senior citizens,” said Erin S. Egan, Colorado director of Democrats Work.

When the College Democrats of America arrived in Denver for their convention, which corresponded with the DNC convention, they went to work at an organic farm for DW. The experience helped bond the students, who came from all across America. As they hoed and pulled up weeds, they conversed about the political scene in their respective states, sports, and Comedy Central.

“Working in an organic garden that helps feed people in need really has helped me connect with Colorado. It’s not just a wonderful place to visit; it’s a state with communities that have strengths and needs — like those at home,” said Callahan. “Denver has been a wonderful host, and I’m glad we could give something back to a community that opened its doors with such great hospitality for us.”

Democrats Work has mobilized more than 3,000 volunteers at over 130 service events since they started operations in 2006.

“We want to show our neighbors that Democrats get things done, making improvements that people can point to and say, ‘The Democrats did that for this community,’” said Egan. “So the next time they need something done, Democrats will be the first ones they will think of to help them.”

And when there is down time, when elections aren’t happening, life goes on, and community service needs are never ending. That’s when DW intends to be there, ready to serve. “We want to engage the grassroots during non-election time, to keep folks active and involved. Instead of asking people to get involved every two or four years, we tap into that energy year round,” said Egan, who also made the point that community service isn’t necessarily partisan. DW welcomes anyone who wants to be involved in their community. “We reach out to people who might not otherwise get involved in purely political activities but share our values. Not everyone wants to hand out campaign literature or phone bank or even wants to work for a particular candidate, but they are willing to paint a school, plant trees, or clean up a park with their friends,” she added.

Having Denver filled to capacity with Democrats willing and eager to participate in community service has helped get the word out about DW. Eagan feels that there is always more to do.

“The convention absolutely provided a great platform for us to get our name out and to show people nationwide what we do. We tried to harness all of the energy leading up to the convention by inviting volunteers to participate in our “Ready, Set, CO!” program, which was a series of events in the Denver metro area designed to both beautify the city before the convention came to town, but also to highlight some needs in our community, like hunger and homelessness — issues that might otherwise go overlooked in the context of a convention,” said Eagan. “On September 6, the weekend after the convention, we called on delegates all over the country to participate in one of about 30 service events as part of a National Day of Service, and we will continue to show our neighbors that Democrats are getting things done between now and the election.”

In their mission statement DW states that: “In the short term, DW seeks to foster the civic participation of Democrats in their communities. In the long term, DW aims to transform our nation’s politics: instead of money, we offer work; instead of message, we offer action. In the end, DW envisions a new type of politics: a politics of service.”

Through a combination of paid and volunteer staff, DW operates consistently in 6 states: CA, NV, WA, GA, AL, and CO. Other states have had projects as well. “We are happy to help anyone, anywhere, get a group of Democrats together to work on a community service project!” expressed Egan. “We have no Maine chapter of Democrats Work, yet, but would be happy to work with anyone in Maine who is interested in organizing service projects for Democrats. We can offer event ideas and support, post the events on our website, and, in some cases, send t-shirts or buttons for the volunteers to wear.”