Maple syrup in the makings, in Madison, Maine. Photo by Ramona du Houx

“It’s a great way to welcome in spring and visit with people,” said the state’s fire marshal, John Dean. He spent the day with his wife Carol and Gregory Simpson, his grandson, and they enjoyed tea brewed by Joyce at Fort Western.

Two poor seasons and increased global demand have sent maple syrup prices skyrocketing. For some, those higher prices are seen as a catalyst to expand the domestic maple syrup industry. In March, U.S. Sen. Charles Schumer, a New York Democrat, introduced a bill to help small producers nationwide create centralized storage and bottling plants, and obtain access to trees on private land. He hopes to increase sales for the maple syrup industry by 400 percent.

“We have 289 million maple trees in New York,” said Schumer in a New York Times interview, “but we tap less than one-half of one percent of them. It’s a large, untapped resource, shall we say.” 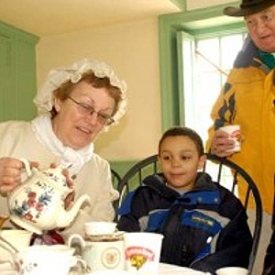 In autumn the forests turn red and orange largely due to the abundance of maple trees in Maine. The majority of them are untapped. Schumer’s Maple TAP Act would encourage landowners to allow maple tappers to access their property, which would increase the volume of maple syrup produced. It takes 40 gallons of sap to produce one gallon of maple syrup.

Schumer wants New York to become the leading maple syrup producer; Maine could earn that acclaim if it taps into the New York senator’s proposal.

Quebec taps over 34 percent of its maple trees, while the nation’s largest producer, Vermont, only taps 2.1 percent.

Quebec is considered the OPEC of maple syrup with more than 70 percent of the world’s supply, producing 5,350,000 gallons last year. Maine, the second largest domestic producer, came in at 215,000 gallons in ’08. All the New England states combined produced 870,000 gallons.

Almost all maple syrup in the U.S. and Canada is made by family-run businesses which have been producing syrup for generations.

The Canadian maple syrup industry is dominated by cooperatives; the most powerful is Citadelle, who sets the base price for its members. In ’08 the industry suffered from a bad producing season. Citadelle paid a premium price to their 2,000 members to offset some of the losses incurred.

The lack of supply made prices jump, at the same time international demand increased mainly because marketing efforts by the Federation of Quebec Maple Syrup Producers, a trade group representing 7,300 companies, paid off. Asian markets are now in love with the syrup. Japan accounts for 10 percent of Canada’s maple syrup exports.

Jack Steeves of Strawberry Hill Farms in Skowhegan sells internationally and sees that market increasing. “It’s only going to grow and grow,” he said. His family-run farm produces from 250 gallons of maple syrup to 1,000 gallons on a busy day. His farm started the tradition of Maple Syrup Sunday 27 years ago as a way to get people out to enjoy their communities and a way to market their products.

The global market’s demand for the product encourages Sen. Schumer who hopes to get Recovery Act funding for his proposal. “Shovel-ready, tree-ready, tap-ready. It’s ready to go.”