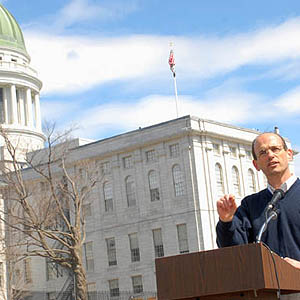 Governor John Baldacci speaking to Maine students on Step It Up day outside the Maine Capitol. He talked about what Maine has done to stop global warming, and the importance of RGGI, which will curb green house gas emissions. Photo by Ramona du Houx

The Intergovernmental Panel on Climate Change (IPCC), consisting of 2,500 scientists, is the world authority on climate change. Their report, released last spring, is considered to be the clearest and most comprehensive scientific statement to date on the impact of global warming, mainly caused by man-induced carbon dioxide pollution. The report was the strongest U.N. assessment yet of the threat of climate change. The report said global warming, widely blamed on human emissions of greenhouse gases from burning fossil fuels, would cause desertification, droughts, a rise in ocean levels and water shortages that could affect billions of people.

“This further underlines both how urgent it is to reach global agreement on reducing greenhouse gas emissions and how important it is for us all to adapt to the climate change that is already under way,” said European Union Environment Commissioner Stavros Dimas.

“Without action to curb carbon emissions, man’s livable habitat will shrink starkly,” said Stephen Schneider, a Stanford scientist. “We can fix this by investing a small part of the world’s economic growth rate.”

While the United States remains the world largest contributor to greenhouse gasses, there are states that are moving to make changes. Maine is in the forefront.

In 2003, addressing climate change, the governor directed Maine’s Department of Environmental Protection to develop a Climate Change Action Plan to assess and address climate change in Maine. The plan was the first in the nation and is being implemented. California has now followed Maine’s example.

“Global warming is real. There is overwhelming scientific agreement that we are changing the environment that sustains us,” said Governor Baldacci. “The stakes are incredibly high. If we allow climate change to continue, the world faces terrible consequences that could put Maine’s economy and quality of life at risk. While the problem is daunting, we are taking steps right now to halt the growth of greenhouse gases, like carbon dioxide, that cause global warming.”

“The need for action is urgent. Nationally, the politics of global warming have stood in the way of progress. Environmental groups have been fighting it out with industry and the business community. The result is a stalemate, which allows the problem to get worse,” said the governor. “Around the country, this has become a partisan issue, with Democrats and Republicans divided. In Maine, it’s different.”

That difference became apparent when representatives of the business sector, legislators, and environmental organizations joined Baldacci last spring. Together they unveiled a negotiated plan to reduce production of greenhouse gases, while investing millions of dollars into energy conservation. Political opposites were joined together and business leaders realized it’s smart business to become more environmental.

The plan that will move Maine forward is the Regional Greenhouse Gas Initiative, known as RGGI.

“Our goal in designing RGGI is to ensure that we achieve the kind of climate goals in carbon reduction that we need to see and at the same time we do it with a system for Maine citizens and the Maine economy to move forward,” said Commissioner of the Department of Environmental Protection David Littell.

RGGI is a coalition of 10 Northeastern states that have pledged to reduce the production of the gases that contribute to global warming and climate change. It’s the nation’s first multi-state effort to curb emissions of carbon dioxide from power plants. The governor’s legislation authorizes the state’s participation in the RGGI. It establishes a carbon dioxide cap and trade program and annual budgets for emissions of carbon associated with the electric power sector in the state.

“Where else in this country could we bring together these different groups to forge an alliance like this?” asked the governor. “We all understood how critical an issue this is, we all knew we had to work together as a team. We worked together as a large family of Mainers. That’s how we do things in Maine.”

“It’s not everyday business leaders, environmental groups, and politicians come together to help formulate a bill and stand up together and say, folks this is the right legislation for now and into the future,” said Bill Cohen, owner of Verso Paper Mill. “This is the kind of activity that will see my mill into the next century.”

“I’ve never seen such an overall agreement before a bill goes to the floor,” said Senate President Beth Edmonds. “It’s an important measure that will measure all of us in the eyes of future generations.”

“This is a great opportunity to let people know what’s right with the world with Maine as a role model,” said cosponsor of the governor’s bill Rep. Ted Koffman. Being a former State Senator and current Representative, Koffman understands how difficult it is to get such a consensus on a bill. He and others worked up to ten hours a week sorting out every detail of the seventeen-page bill. “It’s difficult to get a bill of such magnitude and complexity with such an united effort behind it. Ultimately, it’s going to integrate energy policy with environmental policy and economic policy for the betterment of Maine. It’s absolutely great for the future of Maine.”

Koffman is known for his environmental efforts and his ability to bring diverse people together to work out solutions. Problems arose but were worked on one by one, “step by step, until we found solutions. We had to ensure that the Maine’s energy producers weren’t penalized, for we have some very clean producers. At the end of the negotiations we were all on the same page,” said Koffman. “This legislation is in all our interests; being Mainers we found common ground.”

Baldacci administration officials negotiated for months on the details of Maine’s involvement in RGGI. They wanted to ensure the best bill possible that would bring everyone together so it would pass smoothly in the Legislature.

“Everyone worked in a truly bipartisan way,” said John Kerry, Director of the Office of Energy Independence and Security. “The governor brings people together.”

“Climate change is the issue for our generation. Our children, our grandchildren will judge us on how we face the issue. To do nothing means we would see higher electricity cost. By undertaking this effort, we are bringing some of the money back to invest in energy efficiency. This is the best way to protect Maine’s interest,” said cosponsor of the bill Sen. Phill Bartlett. “The course we have agreed upon today will make our children proud. Investing in energy efficiency is the quickest way to lower cost for customers and over time translates into huge savings for consumers. By becoming more energy efficient we will have the competitive edge over other states because we will have made the changes already. We will be on the cutting edge.”

The plan also invests in energy efficiency for homes and small businesses and protects electric customers from unreasonable rate increases.

The central core of the initiative is to cap and then reduce CO2 production by 10 percent by 2019. All 10 participating states must agree to this. Then each state is allowed to tailor aspects of the program specifically for states needs. Maine is introducing some unique ideas. One is a component where sustainable forestry would be rewarded. Another would encourage steam as an energy source.

Some companies generate power and have excess steam as a byproduct, which is wasted. With a new process that steam is captured and used for energy. RGGI would ensure that a company that recaptures the steam for energy will not be penalized.

“Making RGGI work for the economy is key, so is implementing it in a way so that it doesn’t penalize certain companies,” said the DEP Commissioner Littell. “Instead of wasting the steam, you use it in a corresponding process on site. A company can increase the efficiency by 60 percent with this combined heat and power system. A provision in RGGI would give these companies retirement credits. They will have to pay for allowances out to the grid, but they won’t have to pay for the steam that generates energy for themselves.”

The program also allows plants to purchase carbon offsets from companies or organizations reducing emissions of greenhouse gases in other ways.

Maine’s six largest power producers that burn fossil fuels will have to purchase credits for each ton of CO2 they emit. Plants must then cap emissions levels for five years, beginning in 2009, and then eventually reduce levels by 10 percent by 2019.

Power plants that are more efficient than required can either bank their excess allowances for future use or sell them to plants exceeding their limits. Officials hope the market-based approach will offer companies financial incentives to surpass their goals.

“Too often, political rhetoric pits the environment against jobs. That’s a false choice we don’t have to make. We know that in Maine, because our air, water, and natural resources are closely tied to our economic health,” said the governor. “My commitment to energy conservation, to energy efficiency, and to renewable energy is longstanding. Because it is right for the environment. It is right for consumers. And, it is right for the economy. What we’ve done will create a regular and predictable market, prevent market manipulation, and help consumers by reducing bills and long-term costs of energy.

Maine’s decision to auction off most of its 6 million allowances could yield tens of millions of dollars. Under the bill all of money will go toward energy efficiency and conservation programs. In essence all the proceeds are recycled back into programs helping the environment. This idea is a first in the nation.

“Some have referred to this bill as a compromise. This is not a compromise. It’s the result of Mainers coming together for all our futures. It’s a good deal for all of us,” said House Majority Leader Hannah Pingree.

Last April the results of a region-wide survey of consumer attitudes on electricity issues were released by the New England Energy Alliance (NEEA). Nearly three out of four consumers expressed concern about the effects of global warming and almost two-thirds are willing to pay more to reduce carbon dioxide emissions. More than 90 percent of consumers — a mandate majority — expressed the desire to choose the company that supplies their electricity based on cost, product offerings, and environmental considerations. Almost 80 percent of consumers support the construction of large wind farms — even after it is pointed out that they can offer poor aesthetics, low capacity factors, and are costly. Two-thirds support mandated efficiency programs. Over 82 percent of Mainers consider the environment to be a major issue.

Maine’s RGGI legislation has sailed through committee meetings and its support reflects the people of Maine’s wishes.

“It’s the responsibility of the governor to bring everybody to the table, regardless of their position, or personal interests,” said the governor. “At the end of the day, everyone at the table recognized that we are all Mainers, and we all want the best for our kids, for our future. The coming together of this widely diverse group speaks very well of all our citizens doing the right thing.”