Governor John Baldacci makes an announcement about the future of Old Town’s Georgia-Pacific mill. Photo by Ramona du Houx August/September 2006 By Ramona du Houx Not many workers previously employed at the Georgia-Pacific mill thought about the tremendous potential for Maine’s economic growth when the announcement was made regarding the transformation of the mill site last September. After months of […] 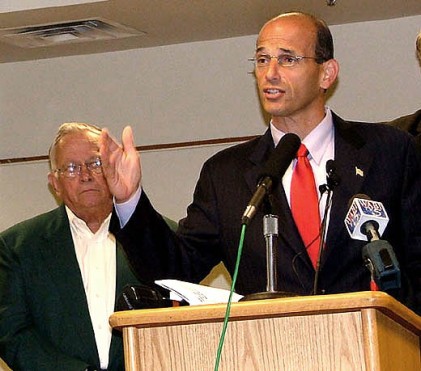 Not many workers previously employed at the Georgia-Pacific mill thought about the tremendous potential for Maine’s economic growth when the announcement was made regarding the transformation of the mill site last September. After months of worry and doubt, most were just excited and relieved that there would be employment at the site with retraining provided.

The reality is that with the governor’s announcement Old Town is poised to become a leader in the production of ethanol.

“Most people are not aware that biotechnology now offers ways to dramatically increase ethanol production and bring down fuel prices,” said Biotechnology Industry Organization (BIO) President and CEO Jim Greenwood in a statement.

“If America is to deal with the problem of high fuel prices, we must develop and scale up a less expensive domestic fuel supply, and ethanol is the best, most readily available solution.”

Researchers have discovered new enzymes that can convert cellulose to sugars which are then fermented into ethanol. These advances in biotechnology now make production of ethanol from cellulose cost-competitive with gasoline.

One recent study shows that biotech processes already being used today could produce ethanol from cellulose for less than $1.60 a gallon. The likelihood of gasoline ever dropping below $2.00 a gallon is not realistic. In fact analysts are predicting increases this winter.

According to a Natural Resources Defense Council report, improvements to the process through research and development (R&D) underway, coupled with expanded production, promise to reduce the cost of ethanol from cellulose to below 90 cents per gallon. Some of that R&D is happening right here in Maine at the University of Orono.

Their biotech center recently received a $10.35 million grant to conduct research on using wood to make ethanol, green plastics, industrial chemicals, and other products now made with oil. The three-year grant consists of $6.9 million from the National Science Foundation and another $3.45 million in matching money from the State of Maine.

UMO researchers will help companies at the new business park develop products that could be made from wood by-products.

“Not only will we help you make the gas you can pump at the gas station, we will help you make the polyesters and plastics from the wood,” said UM Professor Hemant Pendse, chairman of the university’s Department of Chemical and Biological Engineering. Pendse oversees the grants usage.

He explained that students — many of whom became employees at the GP mill — and researchers have been working to develop biotechnology for years at UMO and have the knowledge that should help make the biotech park successful.

“A lot of people don’t realize the skills and ability we have that make us unique,” said Pendse. “This bio-refinery park will be using the latest industrial biotechnology to produce ethanol from cellulose, and we will do it in a smart way … I believe people all over the world are going to look to see how we managed to do this transition successfully. We are going to put Maine back on the map.”

Cellulosic ethanol can be produced from a wide variety of feedstocks, including agricultural plant wastes, plant wastes from industrial processes (sawdust, paper pulp), as well as energy crops such as switchgrass. Even paper sludge can be converted to ethanol.

“Our role is to develop the energy infrastructure of the site. Our intention is to develop a state-of-the-art energy park,” said Edward Paslawski, chairman and CEO of Red Shield Environmental, LLC and of Hallowell International, LLC.

“The existing biomass plant will be the central component. Over time we will bring in facilities such as an ethanol plant, a biodiesel plant, a bio-oil plant and a biogas plant. These plants use feedstocks, like wood, that come from the regional economy. So instead of shipping dollars outside the region that would stimulate jobs elsewhere, we will be able to keep those dollars here in the region.”

Included in the sale were the four wood-chip facilities run by GP, which will provide additional feedstock.

“This is a leading edge project, and as an environmental project it’s absolutely what we must do as a state and a nation,” said Paslawski.

“This marks the first time a closed pulp and paper mill in Maine has been reused for new state-of-the-art production that will transition employment opportunities, create new industry and stabilize the employment and tax base of the community,” said Governor Baldacci.

The Department of Economic and Community Development has been researching the viability of a biofuel, bio-refinery, renewable-energy, business-park facility for the past three years, seeking technological advice from the Rumford Fractionation Development Center (FDC).

The FDC is a Rumford-based organization promoting biomass conversion technologies and predicts that biofuel could eventually account for the majority of the fuel used in Maine annually. If the state followed the FDC blueprint, we would use 50 percent biofuels for fuel annually. The 18-month study was funded by the U.S. Department of Energy and the Maine Technology Institute. The center calls for construction of 50 bioconversion plants in the state during the next 15 to 20 years, paid for largely by private energy companies. Scott Christiansen, the center’s executive director, said the Old Town site is the beginning.

The site will be transformed into a state-of-the-art, cellulose-based biofuel facility with a goal of having four or five different manufacturers employing 1,000-plus workers.

Red Shield Environmental will develop and manage the site, financing the operation of the biomass boiler. Other companies will lease space from Red Shield.

The first residents of the business park will be: Tamarack Energy, a developer of renewable energy, who will serve as the engineering developer for the biomass boiler operation. Hallowell International, LLC of Bangor, a low-temperature heat-pump manufacturer, plans to continue to make residential heat pumps at their Bangor facility and commercial and industrial heaters in Old Town. Portland-based Lamtec Inc. makes peel-and-stick labels. Its goal is to hire 50 people the first year and employ 400 workers by the second year.

“We chose to be part of this historic operation because we believe in it and in what the governor is doing, transitioning industry for the new economy,” said Michael Caron, Lamtec’s president, who grew up in Old Town.

The GP mill almost closed three and a half years ago. The efforts of the governor then to add a biomass boiler helped the facility stay in business, but last March GP announced its intention to shut down. At the insistence of the governor, they worked with him to find a buyer. After months of negotiations, they declined any offers. That’s when Jack Cashman of the Department of Economic and Community Development brought the new business park concept forward, which he had been working on with the governor.

“When one door closed, another door opened,” said Baldacci.

The majority of the former GP workers’ average age is 51, and most of them have worked at the mill since they graduated from high school.

“My great-grandfather, my grandfather, my father and I all worked at the mill. This is a new beginning — a fresh start for Old Town,” said Dan Bird, vice president of Local 80 of the papermakers union, who worked in conjunction with the local career center to help transition workers. Bird was also recently hired by Red Shield.

Under the new agreement, former GP workers will be offered employment by the new companies before the jobs are advertised. In the meantime the state is offering guidance, training, and DirigoChoice health insurance.

“I know DirigoChoice has helped a lot of families. Right now we’re working to make sure the transition is as seamless as possible,” said Bird. “Old Town can be compared to what Orono was like before the university came to town. In time, thousands of people will be employed here. The future is exciting.”

“The total workforce will far exceed the former paper making facility,” said Commissioner Cashman. “This is cutting-edge technology that has worldwide applications.”

Cashman is from Old Town and holds a special place for the community in his heart. “I remember long ago a factory shut down, and the governor at the time didn’t do anything. Not this governor. He’s fought hard for mills throughout the state, and it hasn’t been an easy process, but he does it. He’s determined to do the best for the people of the state.”

The state will work with the new companies to get people back to work as soon as possible. By the end of the year, it’s projected that 200 workers will be employed.

Baldacci has committed $50,000 from the governor’s contingency fund to provide training money for the former GP workers, to prepare them for new careers.

“This community doesn’t take no for an answer. Everyone worked together extremely well to bring us to where we are today,” said Baldacci, who continued on to praise the workers for their patience throughout the process, as well as the union officials and peer support workers for their efforts.

“Getting people back to work, getting the economy going and seeing people become secure again, is what it’s all about. These are good jobs in a future industry that has long-term economic viability.”

“The governor’s determination throughout the process since last March has made this happen,” said Town Manager Peggy Daigle. “I know it’s been a difficult process with the twists and turns in the negotiations. Without his efforts, and Jack Cashman’s, this would be a very different day. I can’t say enough about their efforts for the community. Now we are all looking forward to an exciting, stable future for Old Town.”

“Transforming these pulp and paper industries to increase their diversification, making them more viable, is something we hope to see all over the state. Old Town will become a showcase model. It’s the first one in the state of Maine — it’s not the last one,” said the governor. “The future is bright.”